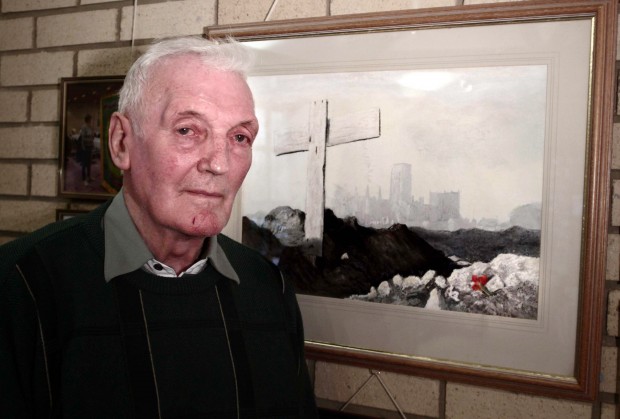 AN ARTIST has painted a battle-scarred landscape in memory of soldiers shot at dawn during the First World War.

The 79-year-old, of Thornley, east Durham said: “I thought, as it was the 100th anniversary of the First World War, that it would be fitting to dedicate part of the exhibition to the soldiers who were shot at dawn.”

Mr Ord, known for the work he does restoring old pit banners, was asked to design a new banner for the Newcastle branch of the National Union of Journalists.

One side – dedicated at the branch’s 100th anniversary in 2012 – bears the painting of a red poppy with a white centre – the emblem of the Shot at Dawn Pardons Campaign.

During the war 306 British, Irish and Commonwealth soldiers were executed by their own men for alleged battlefield offences such as cowardice and desertion.

After a long campaign, backed by The Northern Echo, the pardons were eventually granted in 2006.

The only colour is that of a red poppy symbol – a flower that bloomed in Flanders and became a symbol for the blood spilled.

“When I first heard of the soldiers who were shot at dawn, I could hardly believe it – that we would shoot our own people, some of whom were only 17-years-old and were suffering from shell-shock.”

The exhibition is in the Durham Botanic Garden’s coffee shop until the end of January.