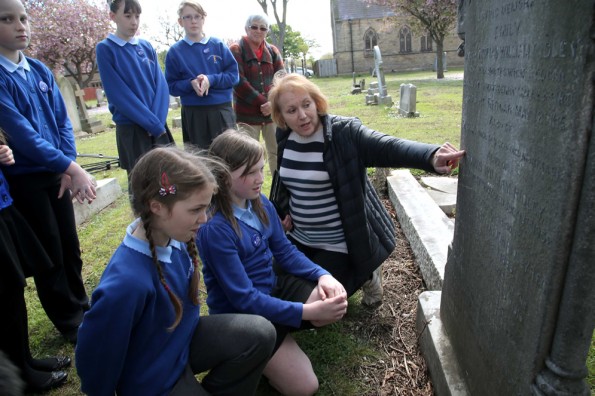 ETCHED IN HISTORY: Classmates look on as Lily Beal and Megan Jones, from Ings Farm School, in Redcar, are shown details of a war grave in Redcar Cemetery by local historian Janet Philo

TO mark Redcar’s contribution during the First World War, the Friends of Redcar Cemetery have enlightened children and worked on an educational DVD as part of a £10,000 windfall it received from the Heritage Lottery Fund.

It is aiming to help local people understand the experience of residents during the 1914-18 war, including the stories of local soldiers, sailors and airmen based in the town.

They will uncover the stories behind the 16 First World War graves and 36 family graves in Redcar Cemetery, as well as a further 11 war graves at Christ Church, in Coatham.

The group discovered a tailpiece of a Blackburn Kangaroo British bomber, which is going on display in Middlesbrough’s Dorman Museum, and received royalties from a 1,000 copy print-run of John Harland Watson’s book, Aces High at Redcar: The History of Redcar Royal Naval Air Station 1915 to 1919.

Pupils from Redcar’s Ings Farm Primary School scattered poppy seeds and planted violets in remembrance in the old section of the cemetery, which was captured on film for a DVD commissioned by the ‘friends’ during the summer. The ten and 11-year-olds also visited Middlesbrough Archives and Heugh Battery, Hartlepool, as part of the project, as well as learning about some of the heroic casualties of war buried in the graveyard.

One of the graves they paid respect to was that of 2nd Lt Stewart Gordon Ridley, known as “Riddles”, from Redcar of the Yorkshire Regiment, who died in the Libyan desert aged 19, on June 18, 1916.

When the pilot and his mechanic became stranded with just a spoonful of water between them, Lt Ridley shot himself to death.

When a search party arrived both men were tragically found dead lying side by side.

“It is important for the children to understand that the war did not just have an impact in London but in Redcar as well,” said teacher Gail Wilson.

“I do not think the public has an understanding of the stories and the suffering of the men who went to fight.”

The youngsters also wrote the names and thoughtful words on 20 crosses which have been taken by the North-East-based Boundary 500 Motorcycle Group to the Menin Gate memorial, Ypres, in Belgium.

Dot Ahmed, secretary of the Friends of Redcar Cemetery, added: “Thanks to the award from Heritage Lottery Fund, this project is inspiring a broad cross section of our community, leaving a lasting legacy in the quiet reflective space of Redcar Cemetery’s old section for the benefit of all.”