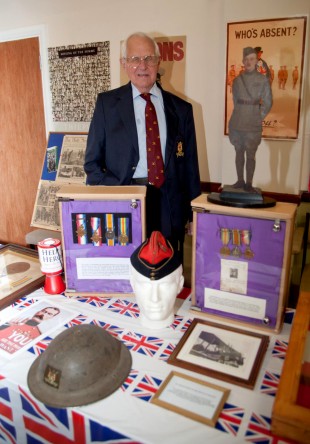 A CHURCH council has led the way in bringing the stories of WWI to life for the next generation and encouraging the whole community to get involved.

Guisborough Parochial Church Council received £10,000 from the Heritage Lottery Fund for a project based in St Nicholas Church and Gisborough Priory to research war stories.

Organiser Susan Hill said one of the main elements of the research was on two wooden crosses brought back from France, which are housed in the memorial chapel in St Nicholas Church.

All 197 names on Guisborough’s war memorial in the church precincts have also been researched with the help of pupils at Laurence Jackson School and Prior Pursglove College.

On April 3, 1917, aged 33, he died as a result of being accidentally shot by one of his own sentries during a violent thunderstorm.

The other grave marker, which is now in the Memorial Chapel of St Nicholas Church, belongs to Lieutenant Colonel Bernard Hedley Charlton MC.

A native of Guisborough, he gave his life for his country during the Battle of St Quentin, in France, on 22 March, 1918, while commanding 4th Battalion of The Green Howards.

In May 1915 he was gassed at the battle of Ypres, and in the New Year’s Honours of 1916, Captain B H Charlton was awarded the Military Cross for acts of exemplary gallantry during active service against the enemy.

On March 22, 1918, he was killed in action during the Battle of St Quentin. His final resting place is in Rosiel Communal Cemetery Extension, Somme, France.

Mrs Hill said: “We held a heritage weekend on July 4-6 to bring the town together to remember those who gave their lives from our town.

“All parts of the community got involved, from the businesses decorating their windows, Totally Locally market stall-holders, to community involvement in all aspects of the exhibitions.

“There were exhibitions in St Nicholas Church and Parish Hall, including a wonderful display of costumes of that era designed by students from Cleveland College of Art and Design.”