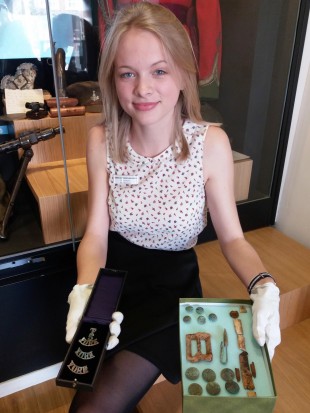 A MUSEUM which was instrumental in the quest to name an unknown First World War soldier, has put on display some of the objects which finally helped identify him.

Items found with the remains of Private Henry Parker, including a belt buckle, buttons, shoulder badges and a cut-throat razor, have been donated to the Green Howards Museum in Richmond by his family and are now available to view, free of charge, in the entrance gallery.

Curator Lynda Powell explained: “Human remains were found in a field near the village of Martinpuich on the Somme and we were contacted by the Ministry of Defence’s Joint Casualty and Compassionate Centre at the end of 2015 to see if we could help.

“396 men from the regiment had died in or around the location where the remains had been found, but we gradually reduced the number of possible candidates down to 12.

“The shoulder badges showing that he was a territorial soldier in the 5th Battalion had helped in that process of elimination. Our archive information and research had played their part; next, we simply had to wait and hope that the soldier who had been discovered was one of ‘ours’.”

Next, a forensic team took DNA from the femur of the remains and compared it to that belonging to family members of some of the shortlisted soldiers who had agreed to be tested.

A match was found, and Pte Parker, who died aged 22 on September 26, 1916, during the Battle of the Somme, was reburied with full military honours at Warlencourt Cemetery in France, in May this year – with 25 members of his family in attendance.

He originally came from Weaverthorpe, in the Ryedale area of North Yorkshire and two boxes, containing the items which had lain with him in a French field for the last 100 years, were given to the museum by the modern-day Parker family.

“It feels really special to handle these items which are not only so very old, but which also link to a real person whose identity is finally known,” says Olivia Wallis, A-level history student at Richmond School, currently on work placement at the museum.

“The whole Henry Parker story is fascinating to me in the way that it has linked this soldier who was ‘lost’ for so long, with his modern day family and a whole network of people who have been involved in finding him, want to learn more about him, and make sure his sacrifice is not forgotten.

“It’s reinforced to me that history is always relevant – and always human.”