The lasting First World War legacy of the Richmond Sixteen 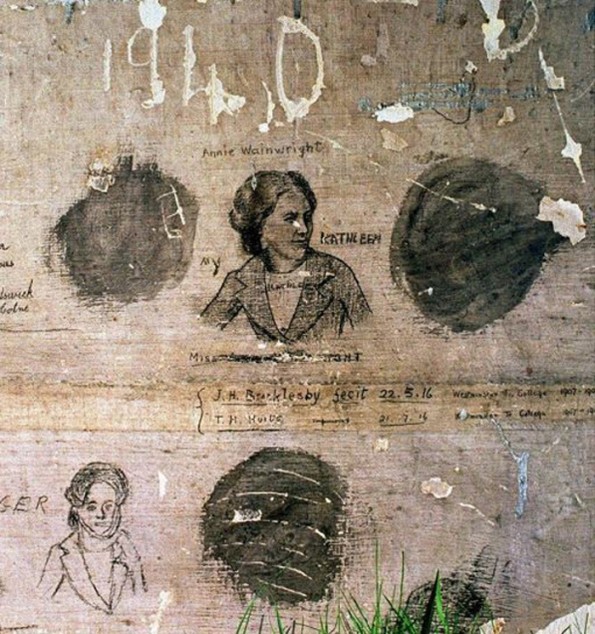 LEGACY: Some of the graffiti left by the conscientious objectors in the cells at Richmond Castle

Many of the 16 conscientious objectors who were imprisoned in the 19th-century cell block at Richmond Castle left their mark on the walls in the form of drawings and writings.

Their graffiti is regarded as a rare visual display of a fascinating aspect of the castle’s wartime story, reflecting the personal and religious views of those imprisoned for their anti-war views nearly 100 years ago.

And now the Heritage Lottery Fund has awarded English Heritage £25,000 to develop a project to conserve and protect the unique markings.

The “Voices of Rebellion” project will look at the many different people and stories recorded in the cells, and at the differing perspectives of those incarcerated.

Much of the later graffiti was left by soldiers stationed in Richmond before and during Second World War and gives a further insight into the relationships between the medieval castle, the town and the military.

A full inventory of all the graffiti will also be compiled for the first time to give a deeper insight into all those who spent time within its walls and it is hoped that local people will support the project, helping to conserve the building and research its history.

Senior curator Kevin Booth said: “The cell block is the only surviving feature of the castle’s use by 20th-century military.

“It was not constructed for the long term and does not currently provide suitable conditions for the preservation of the graffiti. It is remarkable that the graffiti has survived nearly 100 years in such damp conditions but we need to carry out specialist work to ensure it can survive for the next century.”

He added: “We have the living sentiment of these men dating back to 1913 here on these walls, in some places beautifully drawn images of a loved one or poetic musings on the climate of war.

“As we remember the centenary of the First World War, they are an important record of a certain movement of people during this time and we need to do our best to preserve them and tell their story for future generations.”

The Richmond Sixteen were absolutist conscientious objectors who refused to undertake even non-combatant military roles.

They were eventually transported to France and court-martialled. Fifteen were sentenced to death but that was immediately commuted to ten years penal servitude and they were released in 1919.