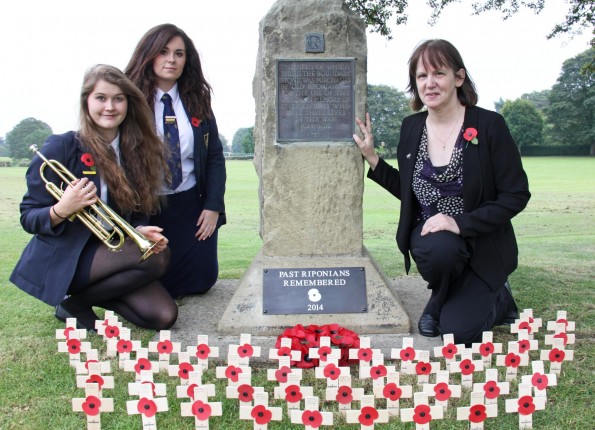 HEROES REMEMBERED: (Left to Right) Ripon Grammar School pupils Martha Barber and Shannon Millar with Old Riponian Claire Green at the First World War commemorative stone with poppies bearing the names of all those former pupils and masters who were lost

A SCHOOL has paid a poignant tribute to its former pupils and staff who have their lives in the First World War.

Nearly 300 former pupils and teachers from Ripon Grammar School served their country in the Great War but sadly 49 did not come home.

In 1922, the former students’ association, Old Riponians, purchased a field in their memory, the boundary of which they marked by installing a commemorative stone.

And in this centenary year of the outbreak of the war, the association decided to add a second plaque to the stone with the words Past Riponians Remembered.

Former pupil Claire Green, whose father, brother, nephew and uncle, who was killed in the Second World War, also attended the school, unveiled the bronze plaque, which was made by her family’s company HA Green and Sons.

In her address she said: “We gratefully acknowledge the part played by the boys and masters who served and lost their lives in the First World War; for their bravery and sacrifice which helped to give us our freedom, we will never forget them.”

Student Shannon Millar, a sixth form boarder whose father is in the forces serving in Kenya, recited Wilfred Owen’s poem The Send Off.

Martha Barber, 18, of Thirsk, played the Last Post and Patrick Lindley carried the standard on behalf of HMS Heroes, a national peer support initiative for children of service families.