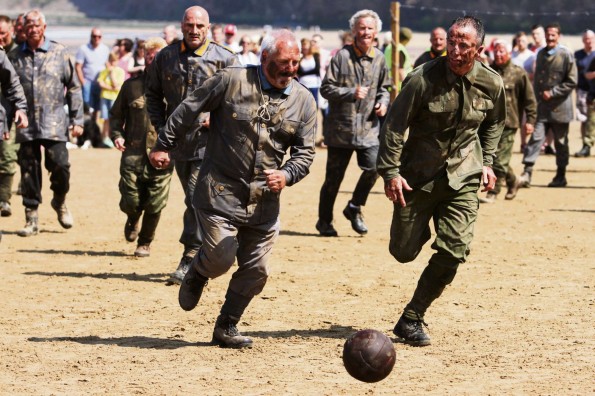 German and British soldiers re-enact the football match, played during a truce during the First World War, on Saltburn beach

THOUSANDS of people flocked to the seaside yesterday to watch an unusual game of football organised to mark the centenary of the outbreak of the First World War.

Players were cheered onto the makeshift pitch by the enthusiastic fans as they emerged from the trenches onto Saltburn beach.

And with the two teams dressed up in vintage army uniforms from the era, the seaside town played its part in remembering those who made the ultimate sacrifice. 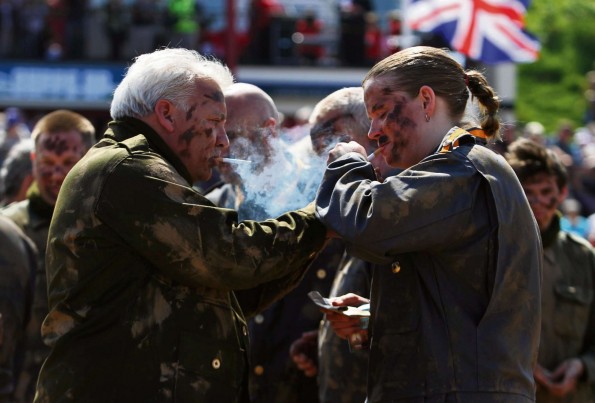 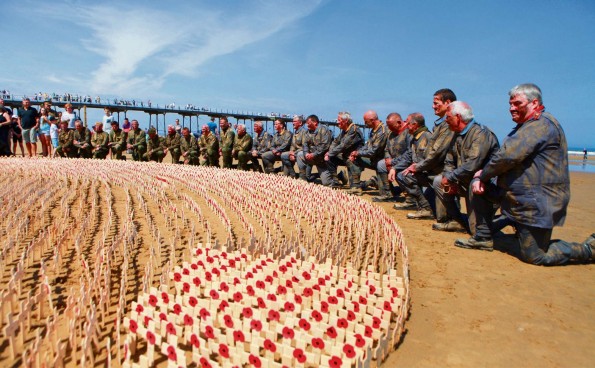 SILENT TRIBUTE: The truce footballers go down on one knee to remember the sacrifice of First World War soldiers

Silent Night, which was sung by German soldiers on the day of the truce football match, was sung in both German and English as the players prepared to play the game.

Allan Whiley, who had been planning the event for a year with four helpers, said he was delighted at how successful the day had been.

“It has been absolutely amazing, he said.

“The amount of people who have turned out has made the day really special. The game was played in the spirit of the original and it doesn’t matter whether we won or drew – it was about paying tribute to the people who lost their lives in the First World War. 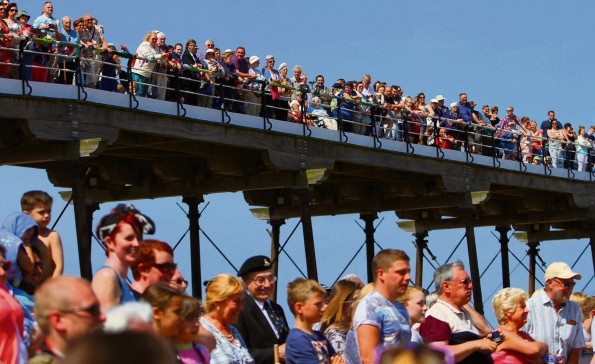 “I would to thank everyone who helped to organise the event, from the council to the costume maker and the people of Saltburn and the surrounding area should be proud of today.”

After the game, a Tiger Moth aircraft flew over the pitch and dropped 40,000 poppies into the sea. 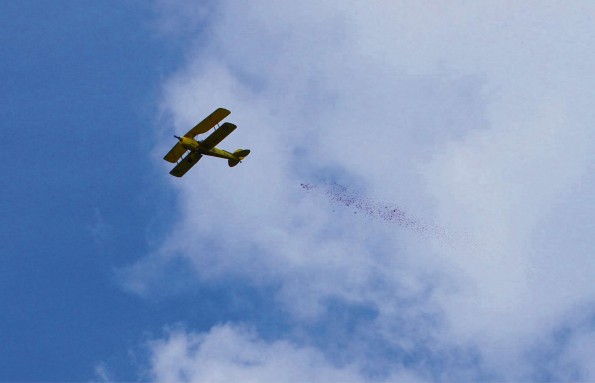 A Tiger Moth flies over the pitch, dropping 40,000 poppies into the sea

There will also be a field of poppies to create a temporary war cemetery in tribute to the soldiers who never returned from the battlefield.

The crowds who turned out to watch the match certainly appreciated the efforts of the players.

Gerry Warburton, who was on the beach with his two children, said: “I can’t believe they managed to play so long in this heat with their uniforms on but it was a good way to mark the centenary.”

Bethan Adamson, of Saltburn, added: “Watching the plane fly over the beach and drop the poppies was a great sight – the whole day has been great.”

As well as the football match, there was a small exhibition about the conflict on the pier, a brass band, and a replica of a First World War trench. The day time event ended with a bugler playing the Last Post.

Proceeds from the event, to be match funded by Barclays, will go to the East Cleveland branch of the Royal British Legion who will use the funds to restore Saltburn’s War Memorial.

Organisers hope that they will have raised more than £10,000 from the event.