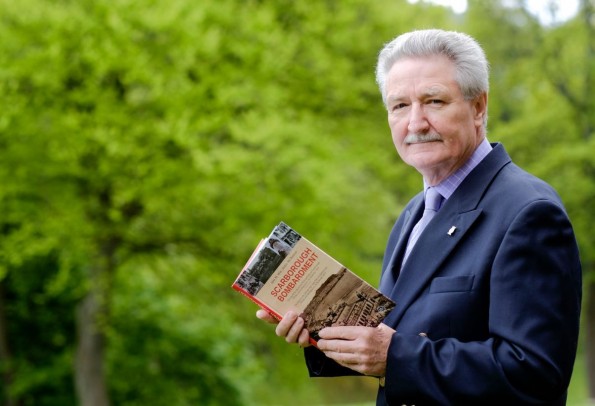 Robin McDermott with the new book

HISTORIANS from Germany and Britain have collaborated on what’s believed to be a unique bilingual book about the German bombardment of the East coast in 1914.

Scarborough Bombardment, by Dr Jann M Witt, naval historian at the German Naval Memorial, and retired British military officer Robin McDermott tells the story of the attack by the German High Seas Fleet on Scarborough, Whitby and Hartlepool in December 1914.

It was the first effective attack on British soil of the First World War and resulted in the deaths of 157 men, women and children, the youngest, in Scarborough, just 14 months old.

The attack caused great public outcry, and “Remember Scarborough!” became the slogan for an impassioned recruitment drive for much of 1915.

In 2014, Arts Council England helped to fund a major exhibition about the event at Scarborough Art Gallery.

Part of the funding has gone towards the new book, printed in both German and English.

Project officer Esther Graham said: “This beautiful book is a unique commemoration of the terrible events of 1914, and a symbol of the unity between our two nations a century later.”

Published by German company Palm Verlag and priced at £9.99 in this country, the book will be available simultaneously from Scarborough Art Gallery and the German Naval Memorial in Laboe near Kiel.

It will be launched at the gallery at 12.30pm on June 6, when both authors will be on hand to sign copies.