NEARLY 700 schoolchildren from across the North-East entered poems in The Northern Echo’s first poetry competition, and the unenviable task of selecting a winner fell to four Vane Women.

They are members of a Darlington poetry group which started meeting 23 years ago at the Arts Centre which used to be in Vane Terrace – hence their name. Tutored initially by Jackie Litherland, the group has published numerous pamphlets of poetry and short stories by women writers.

They hold regular readings in the Conservatory Bar of the Civic Theatre, and run workshops and masterclasses. On Monday, at 7.30pm, in the theatre, they launch their latest publication which is a collection of poetry entitled Blue Horse by Joanna Boulter.

The Vane Women – Jackie accompanied by Marilyn Longstaff, Dorothy Long and Lindsay Balderson – were impressed by the standard of the entries, particularly from the younger children.

“They have all got great qualities,” said Lindsay. “It has been a privilege to judge them.”

Blood on the Battlefield, by Olivia Skilbeck, 14, of Sedgefield Community College, was a clear winner.

“It comprises all the aspects of war, and so has universal appeal,” said Jackie. “The rhyming was unforced and natural.

“I was especially impressed by the use of the word carved, which takes us to the next stage after the war when the names were carved onto memorials.

“And the repetition really brings it home to you and makes it powerful,” said Marilyn. “It gives you this feeling of the soldiers going over the top relentlessly. It is easy when writing about the war to go for the blood and guts, but this doesn’t do that. it goes for the emotion.”

Dorothy added: “The line “lost their heads” is interesting, because the soldiers did, literally, and also with shell shock – and, in a very modern context, it is still happening.”

The judges decided to make Gabriella Orsi, of Darlington’s Carmel College, the runner-up.

“Poppies is an outstanding poem for an 11-year-old,” said Jackie. “In the image of the poppy is a metaphor: when one man falls another poppy grows. The great thing is that it is not sentimental. Instead, almost like Wilfred Owen, it gets across that there’s a beauty to war which is also very sinister.”

The Vane Women selected the winner, the runner-up and eight further finalists, and an Editor’s Commendation award has gone to two further young poets who we thought deserved acknowledgement.

Many thanks to the Vane Women and especially to everyone who entered. All the entries can be seen at thenortheastatwar.co.uk, and it is hoped to include them in a publication in the near future. 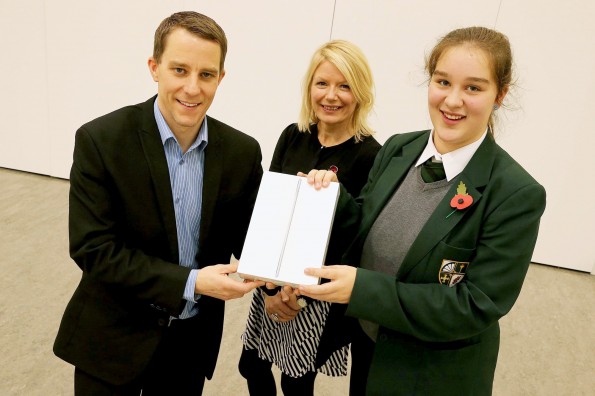 Blood on the Battlefield

My ears ring in the deafening silence.
My eyes lock onto my target.
With a flick of my finger, he’s history.
Dreams, memories, hopes, wishes.
Gone, never to return.
It flashes brightly in front of my eyes.
Memories of family, friends, past lovers.
There in one instant, gone in the next.
I’m pushed back by the force of it.
My face burns in its furious light.
Then I’m gone.
A forgotten face in amongst countless others.
My body is broken, beaten, drained of life.
A shell of a bomb detonated too early.

As midnight approaches,
Europe holds its breath.
Will tomorrow bring life,
Or will tomorrow bring death?
As Big Ben chimes our fates are changed,
Our problems so small now rearranged.
‘God save the King’ rings in my ear,
All that I feel is uncertainty and fear.
Europe is broken,
As men search for power.
Death and destruction in every hour,
Honour and guilt,
In foreign lands.
‘It will be over by Christmas’
Say the lads in the mess,
But when I return,
Will I hide my distress?

Thousands of rats, scurrying across the floor,
Is nothing compared to the bangs outside the door.
Lice biscuits for tea tonight, eating in darkness
without a light.
Six and a half pence a day,
not enough to avoid drinking water out of a drain.
I don’t want to go, it’s suicide out there.
We didn’t start this war – this isn’t fair.
Maggie, my favourite horse
now just blood and bones, thanks to King George.
Just like my mate, Freddie Young
He joined his parents, thanks to a German machine gun.
Stood in the barrel of a rifle, the scariest part.
No time to say goodbye, or tell your family,
you love them with all your heart.

His wild heart beats with painful sobs,
His stranded hands clenched on an ice-cold rifle,
His aching jaws gripped a hot, parched tongue,
His wide eyes search unconsciously.
He cannot shriek.
Bloody saliva
Dribbles down his shapeless jacket.
I saw him stab
And stab again
A well-killed Boche.
This is a happy warrior;
This is he…

He lives in his past, say his well-versed eyes,
His quailing mind and quivering smile.
His trembling hands and vigilant stare;
He constantly grips his frayed armchair.
His ears hear sounds which aren’t really there,
I ask him a question, tell him I care.
He answers: just nods or shakes his head.
His power of speech burned out, all dead.

Why?
Why is this not murder?
Why is this not over?
Why did this come?
The loss, the destruction, the death.
It reaches past the battlefield,
It reaches past the empty bullet shells
It spreads until it covers the Earth.
It is not what is in the heart,
It is what is planted into the mind,
It is the vengeance of soldiers past,
It is the humanity that is lost,
That steals away our hearts and turns them into stone.

The bells did not ring for those,
Who lay like animals upon the crimson grass;
Their bodies as still as a summer’s day,
Their eyes of haunted memories closed.
The sun rises over the land of lost souls,
Casting the golden glow of heaven onto the battlefield.
It filters through the red petals of a lone poppy,
As finally the bells of remembrance toll.