Shildon marshalled in remembrance of fallen 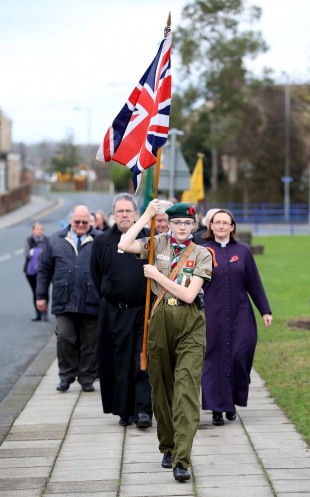 DOZENS of people turned out for Shildon’s Remembrance service yesterday.

Parade marshall Kevin Stevens led the annual parade from the Dabble Duck Industrial Estate to the Redworth Road War Memorial at about 10.45am, where a service was held by Reverends Graham and Emma Morgan, of Shildon Methodist Church.

They were accompanied by the New Shildon All Saint’s BP Scout Group who also acted as flag bearers and led the National Anthem.

Several wreaths were then laid by officials and members of the public including Town Mayor, Councillor Henry Nicholson, and town and county councillor, Trish Pemberton.

Cllr Nicholson said: “It’s a very poignant weekend – we are remembering the people who have made the ultimate sacrifice so we can have the lifestyle we are acclimatised to.”

Cllr Pemberton said: “I see it as a giant privilege to represent the kind of people you see here today.”

Families also flocked to the town’s National Railway Museum, which is displaying a number of Second World War vehicles until November 20.

Vehicles on display included a double-decker bus which ran from Darlington from 1942 to 1950, and a Ford Willy’s Jeep, both of which were put on display by the Aycliffe and District Bus Preservation Society. 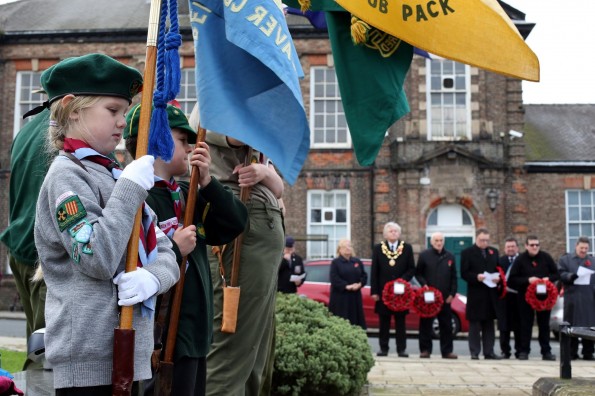 Members of the North East enthusiast group, Yesterdays Heroes, were also on hand to tell people more about the era.

The vehicles joined guest locomotive S160 2253, an ex US Army Transportation Corps locomotive which was part of the museum’s Cab It event, allowing people to get into engine cabs throughout this weekend. Events officer Pam Porter said: “It’s really nice and quite special to have it here because the railway played a fundamental part in the war effort.”