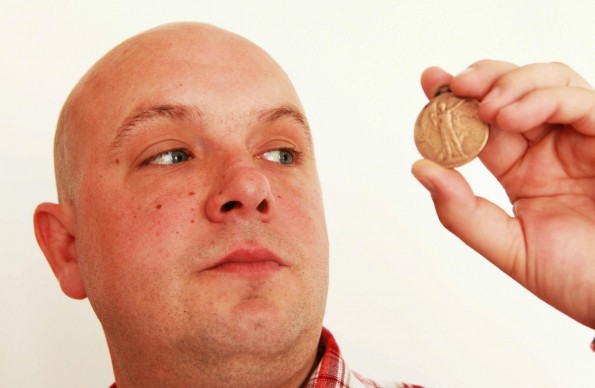 A METAL detecting enthusiast who discovered a forgotten First World War medal buried in a farmer’s field hopes to return it to the soldier’s family.

The 38-year-old had only been out searching for around ten minutes one day in June when his equipment picked up a strong signal and he found the medal buried about six inches underground.

“I thought it was a coin when I first saw it,” Mr Mcadams, from Spennymoor, said.

“It was really dirty. I’ve been cleaning it since June to get it looking how it does now.”

The Victory Medal was awarded to all British Empire servicemen and women who were mobilised in any service and entered a theatre of war between August 5, 1914, and November 11, 1918.

It bears a picture of a winged ‘Victoria’ figure with her left arm extended and holding a palm branch in her right.

Following some research online and at the Durham Light Infantry (DLI) Museum in Durham City, Mr Mcadams has established the medal was awarded to Private Thomas Schofield of the DLI and found his service record, which appears to make reference to a Star medal and Pte Schofield being ‘sick’.

No details of his war service have emerged.

The DLI Museum has details of one Pte Thomas Schofield of the DLI, but his medals – including his Victory Medal – are kept safely at the museum.

Mr Mcadams said: “I would like to see if I can trace any living relatives and hand back the medal.

“It’s a nice piece and I want them to have it. There may be something their family may not know about their grandfather or great-grandfather’s history as a soldier in that horrible war.”

Mr Mcadams, whose great-grandfather William Mcadams served in the First World War and was awarded the Victory Medal, has an agreement with the landowner that it can be returned to the family.

Mr Mcadams goes searching with his metal detector around twice a week and has also found Roman coins, silver and war badges and buttons.

If you can help him trace Pte Schofield’s relatives, email stumcadams@msn.com