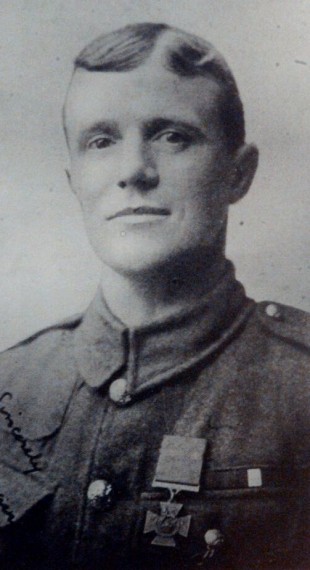 THE homecoming of a miner who won a Victoria Cross while serving as a Western Front stretcher bearer is set to be re-enacted in a pit town.

Private Michael Heaviside had stunned onlookers with his valour, crawling 60 yards across No Man’s Land under heavy fire to bring water and first aid to a wounded soldier lying in a shell hole during the Battle of Arras, risking his life to bring him back to the trenches.

Having been granted ten days’ leave, when the 36-year-old Oswald pit hewer returned home to Stanley on July 12, 1917, the town came to a standstill to give him a hero’s welcome, just days before the Durham Light Infantry soldier was presented with his Victoria Cross by King George V.

In a procession headed by the Craghead Lodge banner, the band, volunteers and the Church Lads’ Brigade, Pte Heaviside was taken to the Stanley Urban District Council office in Front Street, where he took his place on the balcony and was welcomed by the chairman of the council. The procession then passed through South Moor and Bloemfontein and ended at Craghead.

On Wednesday, the procession will be recreated by children dressed in costumes provided by Beamish Museum.

Three horses and a charabanc will join the procession, which sets off from Front Street at 2pm, and will feature Pte Heaviside’s grandson, Norman, playing the role of his grandfather on the steps of the former Town Hall.

Earlier in the day, a commemorative stone will be unveiled at a site in Craghead next to the street where he lived and died.

“The Centenary Project has really grown and has involved a number of key partners and funding streams to bring it to fruition.”

As part of the commemorations, Stanley Civic Hall will host the original 1917 film The Battle of the Somme, accompanied by music from Cobweb Orchestra on Tuesday, July 11.

The next evening, there will be screened footage of Pte Heaviside returning home, accompanied by a newly commissioned piece of brass band music, followed by the Battle of Arras Film with commentary from WW1 film expert Alastair Fraser.

Tickets for both film evenings are free and can be reserved by visiting civichallstanley.co.uk.