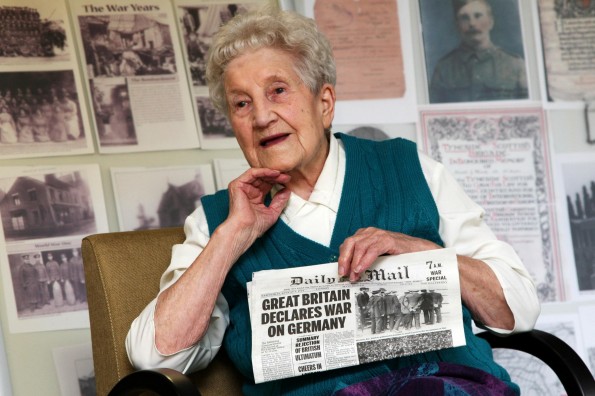 UEST OF HONOUR: 105 year old Alice Coulson as guest of honour at a World War I themed event to commemorate the outbreak of conflict 100 years ago, held at Castle Court Care Home in Annfield Plain

A WOMAN who was five when the First World War started has been guest of honour at an event commemorate the outbreak of the conflict.

The event, at Castle Court at Annfield Plain, near Stanley, County Durham, was attended by 105-year-old Alice Coulson, who is Derwentside Homes’ oldest resident and lives at nearby Stanley Court.

She was five when war was declared on Germany following the invasion of Belgium on August 4, 1914.

Staff and tenants who live in the sheltered accommodation commemorated the historic event with a day of activities today (Wednesday, August 6).

There was music and a summer fair with stalls, a buffet and refreshments.

Half of all money raised at the event will go to the Help the Heroes charity while the other half will go towards the Tenant Community Group at Castle Court.

Angela Hodgson, older persons’ services manager of Derwentside Homes, said: “The World War One commemoration event was extremely popular with our tenants and their families who attended what turned out to be a real multi-generational event.

“Visitors brought memorabilia along with them and enjoyed sharing stories about their parents’ and grandparents’ experiences during the war.

“Everyone said what an interesting event it was and were pleased we had decided to commemorate the centenary in this way.”