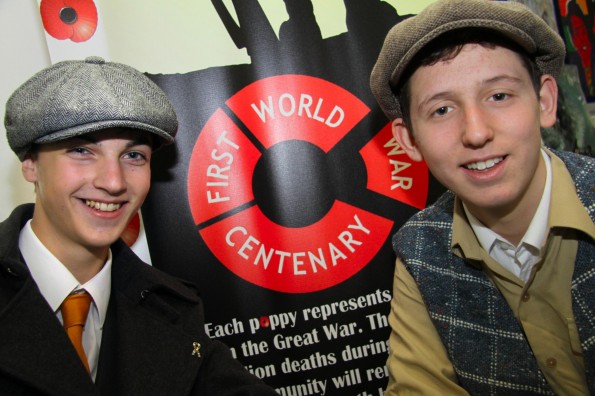 Students at St Michael’s Academy, Billingham, Ethan Hamilton, 15 and George Bailey, 15, both of Billingham, who acted out an enlistment scene to remember the events of the First World War

A DAY of remembrance has given students on Teesside a glimpse of life during the first world war.

Pupils at St Michael’s Academy, Billingham, took part in a host of events exploring the outbreak of the First World War, its impacts on the country and the significance of poppies and remembrance.

Year groups looked at life in 1914, including the history of the British Legion, trench warfare, wartime songs and watched a scene showing the enlistment of young men in Billingham, acted out by students George Bailey and Ethan Hamilton.

Lead by the school’s history department pupils also made hundreds of paper poppies, which were placed on a canvas to create a giant remembrance collage.

In a whole school assembly, deputy head boy Tom smith, 15, read aloud a speech that he will deliver to the Royal British Legion in the Forum, Billingham, as part of the town’s centenary celebrations, and school staff dressed in First World War period costume. 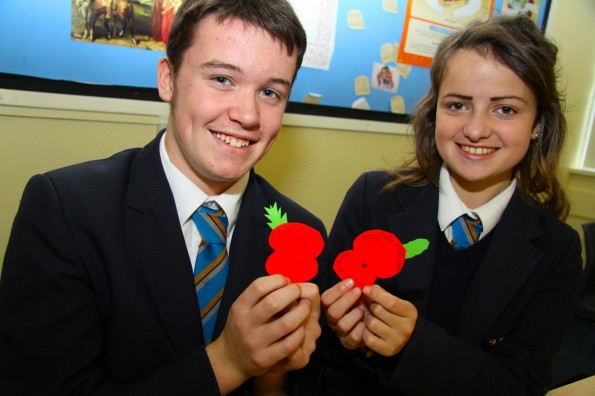 History teacher Clare McCarthy said: “We felt that given it was 100 years since the outbreak of World War One we needed to do something extra special to commemorate the event.

“There has been a real buzz in school today and students have really recognised the suffering and sacrifice of the men and women who fought for our freedom.”

Pupil George Bailey, 15, of Billingham, added: “Learning about the war makes me think of my great granddad who was stranded in no-man’s land for four days but managed to survive.

“I don’t think we should allow future generations to forget what happened during that time and i think it’s important for young people to realise what was involved.”