A GOVERNMENT minister has show his support for a creative project to commemorate the 1,245 Stockton residents who gave up their lives during the First World War. 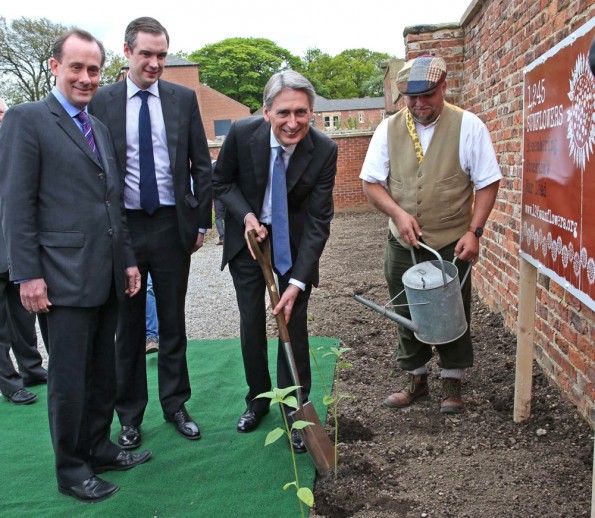 The sunflower project is encouraging people to plant a seed in memory of one of the soldiers before they are cut down in August and brought together for a special memorial service in the town’s Parish Church.

Today, Defence Minister Philip Hammond called into Preston Park, near Eaglescliffe, to plant one of his own after enjoying a tour of the museum and grounds.

He said: “I haven’t come across an initiative like this anywhere else in the country – it’s a really great idea. Growing the sunflowers before cutting them down and using them in a vigil at the church is very symbolic. It’s a fantastic project.”

Teacher Mike McGrother, the frontman of the Wildcats of Kilkenny band, who is leading the project, said: “We have been taking sixth form students into primary schools to help them with their research and it really hits home when they realise that more than 100 of the 1,245 people killed in the First World War were the age of the students helping them.”

The project will honour the 1,245 soldiers listed in Stockton’s Book of Remembrance who died for their country.

Stockton South MP James Wharton said: “It’s a great project and it will really help to bring the community together as they research the family history of the men who lost their lives in the First World War.”

For more information on the project and where to collect seed packets, visit stockton.gov.uk/events and 1245sunflowers.org