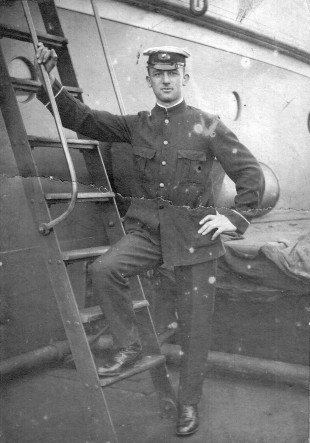 MERCHANT MAN: Alg Wilkinson in his Ropner’s uniform before the start of the First World War

ON AUGUST 4, 1914, the Germans invaded Belgium, dragging Britain into the First World War. Third Engineer Algernon Wilkinson was also approaching Belgium, on board SS Seapool, which was part of “Ropner’s little navy”.

With the enemy invaders only 80 miles away, the Seapool tied up in Antwerp, on August 7, and its captain gave Alg, as he was known to his family back home in Stockton, a handwritten pass on headed Ropner paper. In ink, it said Alg was a British subject and a member of the crew of a British steamer, and so should be allowed to pass unhindered.

Undoubtedly, had he handed it to the German soldiers conducting the “rape of Belgium”, they would have looked at the orange Ropner’s flag flying at the top of the notepaper and quivered in their boots.

The Seapool left the following day, one of the last British vessels to return to the safety of home.

Almost as soon as Alg, 25, reached British shores, he left “Ropner’s little navy” and joined the Royal Navy – a decision which probably saved his life. During the war, the merchant ships of Ropner’s little navy carried vital cargoes across the seas with little protection – they were often sitting ducks for enemy U-boats. When war began, Ropner had a fleet of 57 steamers sailing out of West Hartlepool; when the armistice was signed, there were only 21 left.

Alg, born in Egglescliffe in 1889, had joined Ropner’s in 1911. Always referred to by his captains in testimonials as a “strictly sober” crewman, he worked his way up, passing his 2nd class engineer’s exams, and thoroughly enjoying sailing around the world – even if he was always seasick on his first voyage after a spell on land.

His first vessel was the SS Coleby, and the second was the SS Scawby – Ropner’s called many ships after villages with Viking names in the Cleveland area, but Coleby and Scawby both seem to be in Lincolnshire. Both ships were built in Ropner’s Stockton yard, and both were sunk by the enemy in 1915.

The Seapool, launched from Stockton in October 1913, was Alg’s third vessel. It survived the First World War only to be sunk off Land’s End at the start of the Second.

From the Seapool, Alg moved into the Royal Navy, and volunteered to serve on minesweeping duties with HMS Godetia. 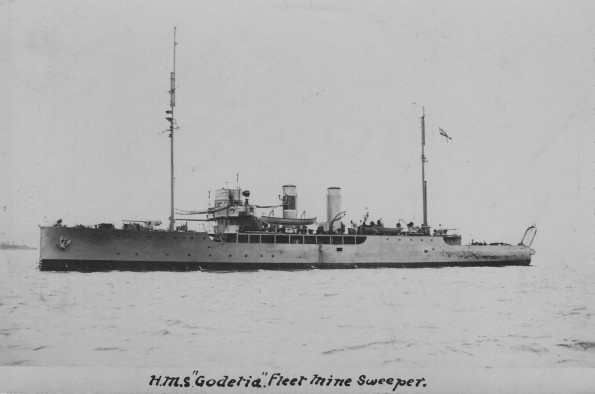 HMS GODETIA: The minesweeper that Alg served on during the First World War

The closest he came to action was when he was on HMS Landrail. In December 1914, as regular readers will know, the Germans had launched a surprise seaborne attack on Hartlepool, Whitby and Scarborough. The following month, British intelligence intercepted wireless communications which revealed the same vessels were about to attack British shipping on the Dogger Bank in the North Sea. The Navy sent a squadron of nearly 50 ships, chasing the German raiders away, and sinking the Blucher, which was one of the three vessels that had bombarded Hartlepool. The British ships attempted to help the German sailors, but themselves came under attack from a Zeppelin and a seaplane. As a result, all 792 of the Blucher’s crew drowned. 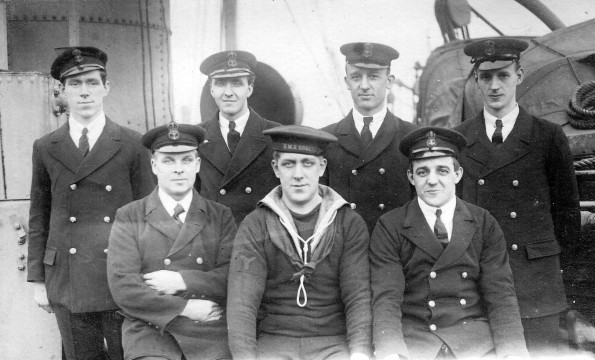 THE CREW OF THE GODETIA: Alg Wilkinson is second from the right on the back row, but in the centre of the front row is Dave Allen of Seahouses. On January 29, 1919, he had a leg amputated after an accident on board with an anchor chain. He retired to Seahouses, ran a barber-cum-tobacconist’s shop and lived in a bungalow called Godetia

Landrail was on the fringes of the Battle of Dogger Bank, but it was in the thick of the action – and the fog – on March 23, 1915. It was escorting the earliest aircraft carriers which were trying to launch an aerial attack on the German seaside town of Norddeich. Unfortunately, the fog was so thick that the mission was abandoned, and Landrail was rammed so badly by HMS Undaunted that it had to be towed home stern first for lengthy repairs.

Alg spent the rest of the war on various ships, but principally on minesweeping duties with Godetia. 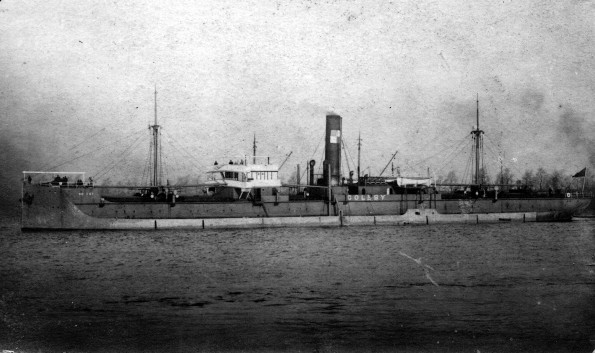 SS SEAPOOL: Alg’s third ship, seen here in Ropner’s shipyard in Stockton at the time of launch in October 1913

“His family lived in Wellington Street, which is close to Stockton station,” says his nephew, Clive Wilkinson, of Langley Park. “Every Thursday afternoon during the First World War, a hospital train came through Stockton, usually slowly. My father, Jack, who was many years younger than his brother Alg, was with some kids spotting engines and he saw Alg at the window of the hospital train. He ran home and told his parents that he’d seen Alg, but they said it couldn’t be as he was up at Rosyth. They then got a note from him saying he’d had an accident, needed some treatment down South and that he had got to the window when he knew they were coming through Stockton.” 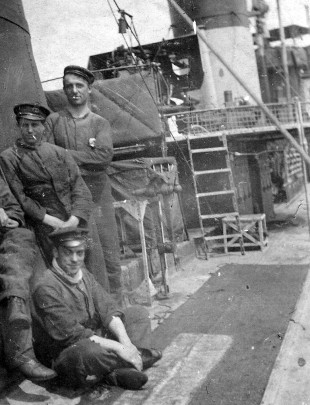 Alg was discharged from the Navy in 1919 although he remained in the reserves until 1934 and during the Second World War he served in the Home Guard.

He worked as a fitter and turner at the Gladstone Rivet Works, in Stockton, and the Brunner Mond, the forerunner of ICI. He married Evelyn Swinbank, from Sedgefield, and they had one daughter, Joyce.

“He was a great storyteller,” remembers Clive. “He used to pull my leg unmercifully. He once said he went to a factory in Brazil where they put in cows at one end and Oxo cubes came out the other.”

Alg died in 1960, and when Joyce passed away, a folder passed to Clive which tells of Alg’s service at sea in two navies.

ALG’S first ship, SS Coleby, was on passage from Rosario in Argentina to Britain with a cargo of grain when it was captured on March 27, 1915, by a German cruiser Kronprinz Wilhelm 460 miles off the coast of Brazil. The German captain gave the Coleby’s master, William Crighton, a statement written in German and English. The English version read:

I hereby give you the official proklamation.

1. Your ship is a hostile one.

2. The cargo of your ship are hostile goods and conterbande.

3. You must immedeastely go with all your crew on board of the auxiliary; personnel goods can be taken along.

4. Resistance will result an compulsion.

Although the German’s grasp of English was a little basic, his sentiments were quite honourable. He allowed his enemy to leave their Stockton-built ship with all their belongings, and only once they were off did he fire and send the seven-year-old Coleby to the bottom of the Pacific Ocean. He treated the crew courteously and landed them safely in the US.

This was one of the last instances of such honour as attitudes at sea became much harder and more brutal.

Alg’s second ship, SS Scawby, was launched at Stockton in 1911. It was attacked by submarine U33 in the Mediterranean on October 6, 1915, and although Captain M Fisker got his crew off without loss of life, it too was sunk.

MANY thanks to everyone who has been in touch since the Memories 177 article on Sir Robert Ropner. He arrived penniless and seasick in West Hartlepool from his native Germany in 1857, but became one of the North-East’s greatest entrepreneurs. He created his famous shipping line and owned a ship-building yard in Stockton. He was the town’s Conservative MP from 1900 to 1910. More on “Ropner’s little Navy” in future weeks.