The rise of Robert Ropner

THIS splendid picture of a First World War steamer is one of the many curiosities that will be for sale at Darlington Book Fair next weekend. 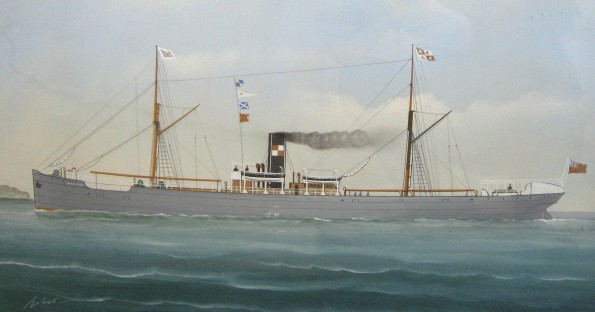 BOUGHT TO BOOK: The SS Maltby, built in Stockton in 1906 and sunk off Sicily in 1918. The picture, painted by a crew member, is for sale at next Saturday’s Darlington Book Fair

It shows SS Maltby, and it was painted by an unknown crew member – his squiggly signature is illegible in the bottom left hand corner – shortly before the war broke out.

The painting was a present – perhaps for retirement – for the chief engineer, Ernest Valentine.

Ironically, then, the “little Navy” was founded by an immigrant who was himself German. 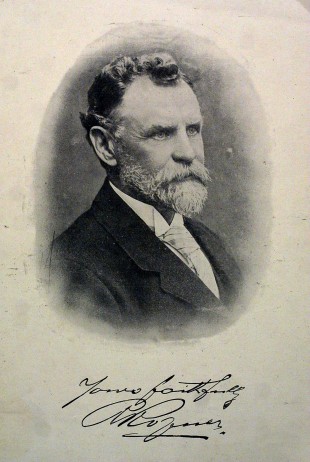 Emil Hugo Oscar Robert Ropner – Robert to his friends – was born in Magdeburg in Prussia in 1838, but both of his parents died of cholera when he was ten. They left enough money for him, and his nine siblings, to get a basic education, but at the age of 19 he and friend decided to run away to Australia.

They reached the port of Hamburg, where they found a vessel bound for the new world. But there was only one job going on it, so Robert’s friend sailed for a new life on the other side of the globe.

Another vessel in the port was about to depart. It was the SS Dora, and was bound for somewhere not quite so exotic-sounding as Australia: West Hartlepool.

Still, Robert climbed aboard – some sources say that he stowed away; others say that he worked his passage. The sources agree, though, that the voyage was so stormy and Robert was so seasick that he vowed never to go to sea again – no matter where he ended up.

He ended up without a penny in his pocket and a word of English in his vocabulary, standing on the foreign dockside of West Hartlepool. BUT it was a booming dockside: Durham coal was being exported and the ships were returning laden with Baltic timber to prop up the pits.

He got a job in bakery, and married the baker’s daughter. Soon she had buns in the oven, and he got a better job working for Thomas Appleby’s firm of coal exporters. In 1868, he launched Appleby’s first steamship and then, in 1875, launched his own line of ships. By the 1880s, Robert had one of the largest lines in the world.

In 1888, he bought the North Shore shipyard on the Tees at Stockton.

Now beneath the major roads that now line the Stockton riverside, the shipyard may well have been where shipbuilding began in the town in 1700.

Robert didn’t initially see the yard as a major concern but as a business where his son, William, could cut his teeth.

In its first year, the yard built four steel steam trampships which set the Ropner naming convention: Maltby, Aislaby, Raisby and Thornaby. They were all named after Viking settlements near Stockton (everyone knows Thornaby, the settlement by the thorn tree; Aislaby is where Aislac settled near Yarm; Maltby is where Malti settled near Ingleby Barwick, and the only Raisby we can find is near Coxhoe, which may break the pattern). 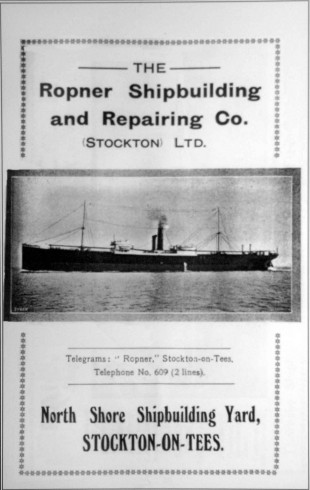 SALES PITCH: A Ropner shipyard
catalogue from 1924, shortly before
the yard closed

The yard thrived, building ships for other arms of the Ropner empire to sail, and for other customers around the world.

Robert thrived, too. He was elected to West Hartlepool council and then Durham County Council. He made Preston Hall in Stockton his palatial home. He was a colonel in the First Battalion Durham Light Infantry.

In 1906, his shipyard built a second SS Maltby – the one in the painting.

It was one of 60 ships that the yard – the third largest in the country, employing 1,500 people – had built by the time of the outbreak of the First World War.

It was one of 27 Ropner vessels that were sunk by enemy action during the conflict. ON February 26, 1918, it was in a convoy from Cardiff to Malta, carrying coal, when it was struck by a torpedo south of Pantelleria Island, near Sicily, in the Mediterranean.

So Maltby barely stood a chance.

The explosion killed the four Indian firemen and trimmers who were crewing the vessel: Husain Muhammad, Hasan Abdullah, Husain Farah and Ali Hasan. Their names are on a memorial in Mumbai. The explosion also killed the third engineer, Alfred Davison, 30, whose parents lived in Victoria Place, Hartlepool.

Like his Indian crewmates, the Hartlepudlian’s body was never recovered and so his name is on the Tower Hill memorial near the Tower of London – this memorial bears the 35,767 names of members of the Merchant Navy and fishing fleet who died during the two 20th Century wars and who have no known graves. 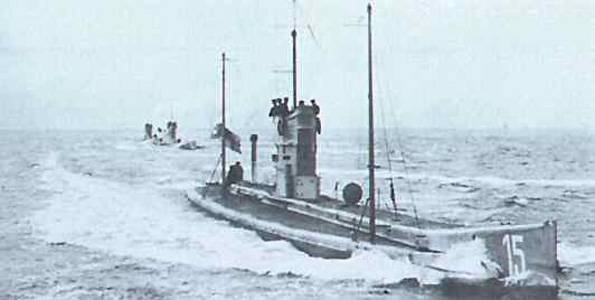 UP PERISCOPE: A German U-boat, like the one that sank the Maltby

The skipper of the Maltby, Captain John Olive, is not listed on the memorial nor on the Commonwealth War Graves Commission’s website, so perhaps he managed to survive.

In peacetime, the Stockton yard struggled to win new orders, and it closed in 1925. By contrast, its parent company carried on, and by the time of the Second World War, only the Royal Navy owned more ships than “Ropner’s Navy”.

In the two world wars, 736 Ropner’s employees were killed. 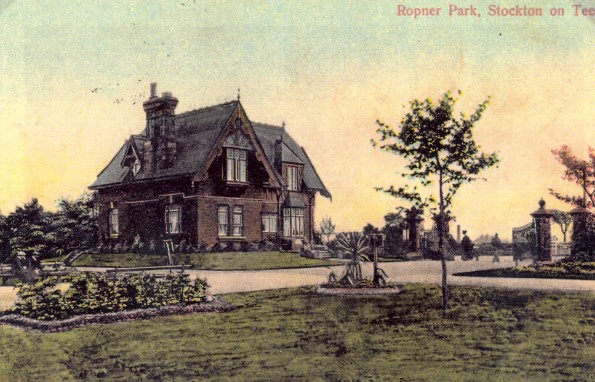 FAMILY PILE: Ropner Park, named after the
shipowner who gave land for the park during his term
of office as Stockton’s mayor in 1893

After the Second World War, the company relocated to Coniscliffe Road, Darlington, where it remained a family-run shipping business until it was taken over in 1997.

The founder, Robert, died in 1924, aged 85. He was a ruthless, even intimidating, businessman, but he was very generous to the area in which he had washed up as a penniless teenager.

He is remembered by Ropner Park, which he gave to Stockton during his mayoralty, and by the Ropner Convalescent Home in Middleton St George (which still stands, despite what Memories 173 said, and to which we shall return in the near future).

His fortune, though, was based upon the work of ships like the SS Maltby.

These are the 27 steamships that Ropner’s of West Hartlepool lost during the First World War. Practically all were built at Stockton, and nearly all were sunk by enemy submarines: