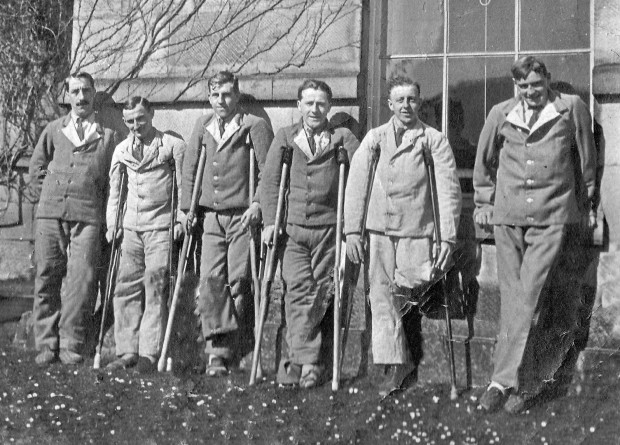 LOST LIMBS: Bill Bailey is second from the right in this picture taken in early 1918 following the amputation of his leg. It was taken outside the Somme Hut at Willersley Castle Hospital at Cromford, near Matlock, Derbyshire.

At 2am on August 4, 1916, Private William Bailey, right, rose up out of his trench and launched himself over the top. Suddenly, he felt a terrible stinging sensation in his right leg which caused him to topple into the mud of the Somme.

A machine gun bullet had smashed through his right thigh. He attempted to dress his wound, but a shell exploded perilously close to where he lay, burying him almost completely in soil. 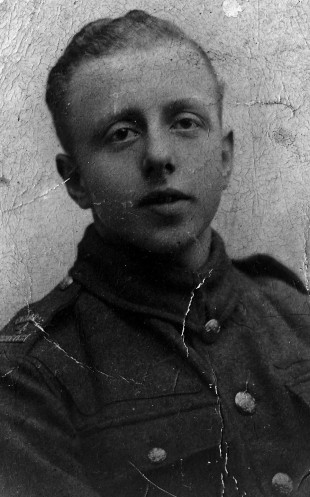 HE later wrote in his diary: “Had awful experience of laying out between the lines in no man’s land for three days without anything to eat or drink.Can’t believe it now when I’m in hospital that I went through it.

Early Monday morning, August 7, I crawled back to our lines and eventually arrived in hospital.”

He had survived only by sucking on the buttons on his tunic, which enabled him to moisten his mouth.

This experience, though, was just a taste of what was to come. He was patched up, sent back to the front where, second time around, he lost half a leg.

It is amazing what the human spirit can endure – he lived another 61 years with an artificial leg.

Pte Bailey was born in Leeds in 1896, but he started his working life as an apprentice printer in Thornaby. In November 1915, he and two Stockton printer pals – Fred Cooper and Jack Skipp – eagerly signed up to the Royal Fusiliers at Middlesbrough Recruiting Office. They were despatched to London where they sought out “one of Lyons well-famed restaurants and partook of one of the best and cheapest breakfasts we ever had”.

Bill’s entry in his diary captured the wide-eyed excitement of the moment: “A mug of tea about the size of a large jug, as much bread as you wish, a rasher of bacon which hardly went on the dinner plate, besides other things.

Things quickly became more serious. They trained at Oxford and then Edinburgh, from where Jack and Fred were sent to the front.

In his diary on April 14, 1916, Bill wrote: “The night before, we all three got a late pass till midnight and had a good ‘tuck-in’ together.

“Then they entrained for the front.What a sad parting.

Fred kept up wonderfully, but poor Jack, it took him all his time. I think he had a premonition that all would not go well with him.

“It was the last time I should ever see him on this earth.”

According to the Commonwealth War Graves Commission website, Pte John Brothwood Skipp of 15, Mitre Street, Stockton, was killed on November 13 – seven months after he’d said goodbye to Bill. His body was never recovered, and so his name is inscribed along with 72,190 others on the Thiepval Memorial, on the Somme.

Pte Bailey, disappointed to be left behind in Edinburgh, was despatched to the Somme with the Northumberland Fusiliers a month-and-a-half after his friends.

He began fighting at Contalmaison, near Albert, with the 13th Durham Light Infantry on July 26, and less than ten days later, in the early hours of August 4, he was hit by a bullet and spent three days in agony in no man’s land.

He was shipped back to Blighty, patched up and allowed to convalesce at St Hilda’s Hospital in Worthing, Sussex, where he was looked after by Sister Beatrice Wilson.

He spent Christmas 1916 back in Thornaby and reported for duty with the Northumberland Fusiliers at East Boldon on December 27. The second phase of his war was beginning. . . 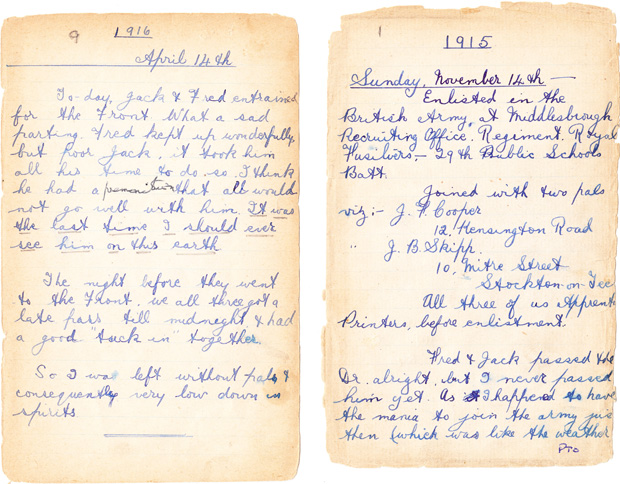 BEFORE January was out, he was at the frontline, this time on the France-Belgium border.

“Tuesday, January 30, ” he wrote in his diary. “Bombing raid at Armentieres. Got through without a scratch, but heavy casualties.” The previous year’s excitement at getting involved had been replaced by relief at just getting through.

He then marched down to Arras, and the next entry in his diary reads: “Four days in the trenches – had a hot time, came out April 2nd, the night before my birthday. Got my birthday parcel and diary the same night.” It was his 21st birthday. 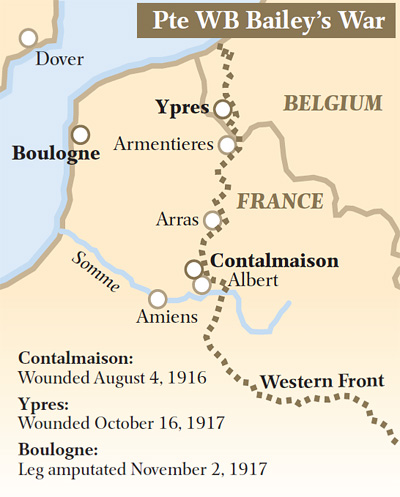 He was in the thick of the action, surviving another assault on Easter Monday. He wrote: “Had a very rough time in trying to take a position and heavy casualties. Just one hour before being relieved on Monday night, April 30th, was very heavily shelled and we lost a lot of men. Had a very narrow escape myself. Five men killed next to me and two wounded. Left for long rest well behind line.”

The rest turned out to be longer than expected: he was twice hospitalised with impetigo, a skin disease brought on by the appalling conditions in the trenches.

He rejoined the Tyneside Scottish regiment of the Northumberland Fusiliers on June 29 and spent the next two months in the trenches around Arras – “very hot time, no let up at all”, was his brief diary entry.

Then, by way of change, he was sent north, into Belgium.

“October 16th. Went in support on Ypres front for first time. I was wounded same night with shrapnel in both legs and right arm. Got down to No 2 Australian General Hospital, Boulogne. Had three operations. In third one, had to have left leg amputated above the knee.

Sheffield. Had a bad time for about a month with right thigh. Got the wind up.

Thought I was going to lose it too.”

He pulled through. The last entry in his diary is for 1918.

“Jan 12th. Left for convalescence to Willersley Hospital, near Matlock.”

In the Derbyshire Dales, Pte Bailey came to terms with his loss and had an artificial leg fitted. He was discharged from the Army as “no longer physically fit for War service” on October 9, 1918, a month before the armistice. 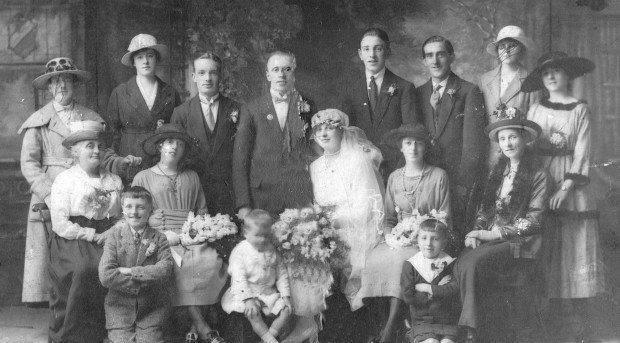 BACK TO LIFE: Wedding day, 1920: Bill, wearing his Fusiliers cap badge on his lapel, married Mabel at Thornaby Baptist Church

He returned to Thornaby and resumed his apprenticeship as a printer. Indeed, when he married Mabel Featherstone at Thornaby Baptist Chapel on September 4, 1920, his job was recorded as a “monotype machine compositor”. 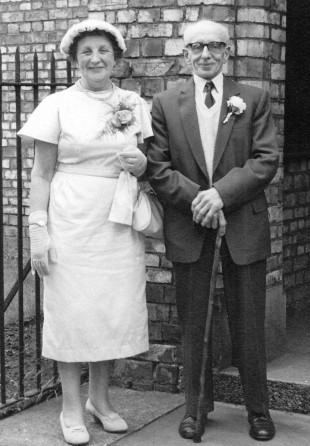 However, he soon became a clerk at ICI and moved to Billingham. Bill and Mabel had seven sons and a daughter, including Billy, 83, who now lives in Consett; Colin, 73, in Scotland, and Michael, 70, in Ingleton, North Yorkshire.

They report that Bill’s artificial leg never stopped him from doing anything he wished.

In fact, he wasn’t one to complain. At the end of his diary, he wrote: “Enough of war. How little we realise how close God is always to us. One always feels a little reserved about one’s own experience, about suffering hardships, not to boast.We are never alone in trouble.”

A religious man, after many years at ICI, he and Mabel moved from Norton to Commondale, in the North York Moors, where they became caretakers of the Wesleyan chapel. Bill died there in 1978, aged 82, followed by Mabel two years later.

He was always keen to help his growing platoon of grandchildren with their school work, particularly when they were studying the First World War. In the family archive, which has been kindly lent to Memories, there is a letter Bill wrote to a grandson in 1974. It concludes: “Kevin – don’t believe anyone who says war is glorious. It is CRUEL. There’s a saying: man’s inhumanity to man makes countless thousands mourn.” 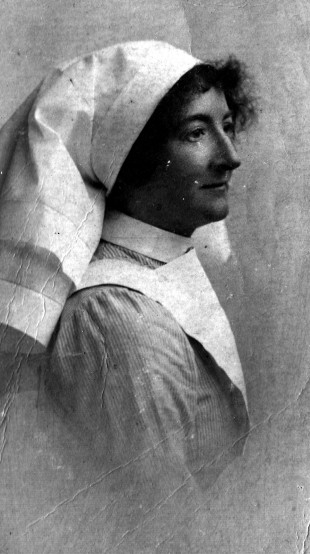 When she died in 1961, in Sussex, her family sent Bill an album of messages that soldiers had written for her in 1916 when they had become well enough to leave her care. She obviously made a big impression on them.

This ditty was composed on January 26, 1916, byWA Oliver of the 1st Canadians:

It is with sorrow
This place I leave tomorrow
Everyone has been so kind
My stay here has been quite sublime.
I go to fight the Hun once more
And if a hole they through me bore
I hope to have the luck to be sent
Back to Hilders to mend the rent.

The following poem was written by DG Penny, on February 2, 1916:

La Gloire de la Guerre
A trench
A stench
Some scraps of French
Some horrible German vapours
A shell
A yell
No more to tell
There’s a paragraph in the papers.