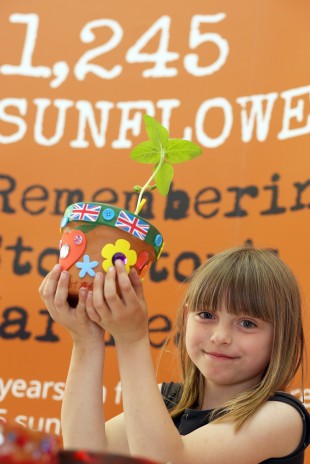 CHILDREN of all ages have remembered their town’s First World War dead in a special event.

The children planted sunflowers at Stockton’s Castlegate Centre as part of a bigger commemoration called the Sunflower Project.

The project remembers the 1,245 soldiers from Stockton who lost their lives in First World War.

Dozens of children planted the flowers and painted the pots as part of the commemoration idea. The children will then be asked to bring their sunflowers to the Parish Gardens in Stockton.

Stockton Council’s creative partner Mike McGrother said: “The bright flowers signify the youthfulness of those who lost their lives. It’s great to see Castlegate Centre joining the many other individuals, families and community groups already growing flowers around the region.”

A commemorative service will take place on Monday, August 4 at Stockton’s Parish Hall to mark the 100th anniversary of Britain joining World War One.

Leader of Stockton Council, Councillor Bob Cook, said: “The 1,245 Sunflowers project is a significant tribute to the young people who sacrificed their lives during the First World War, many of who were from our borough.

“We have already had a fantastic response to the project and it’s wonderful to see Castlegate Shopping Centre encourage even more members of the community to be a part of this special project.”