The day the clocks stopped 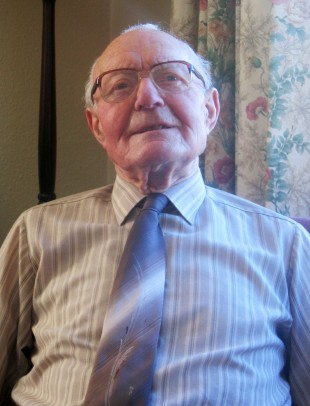 ARTHUR Rodgers was there, 92 years ago, when time stopped. “I do remember this, ” he says. “It was near Christmas. There was a lady running away with a cat under one arm and a Christmas cake under the other. I’ve never forgotten that.”

Time stopped shortly after 8.20am on December 16, 1914. Three German warships slid silently through the North Sea mist and, while Arthur’s elder sister made her way to school and his father started his shift at the shipyard, suddenly began shelling West Hartlepool.

It was the first direct attack on the British mainland in what most ordinary people believed to be a faraway war being fought on foreign fields.

Shrapnel burst in through a window in Arthur’s house in St Oswald’s Street – “in those days you didn’t have a lounge, you had a front room and we got a three inch piece through the front room window” – and through a bedroom in a neighbouring street where it struck an alarm clock and caused it to stop at exactly 8.23am. That clock this week travelled to the House of Commons to enthuse about the North-East in a one-day exhibition of the region’s historic treasures.

Arthur Rodgers – himself something of a historic treasure as “I’ll be 96 in June, with a bit of luck” – travelled little further this week than the corner shop in Northallerton where he collects his daily copy of The Northern Echo. He was still cycling regularly until 18 months ago, but then a car ran over his left foot and slowed him down a bit.

But he can remember 1914 well enough, when he was just three-and-a-half.

“We were having our breakfast and wondered what the noise was about, ” he says. “There were all sorts of rumours flying around, like the Germans had landed and we were being over-run like the Belgians had been.

We had to get away from the coast.”

The noise from the bombardment roared as far inland as Middleton-in-Teesdale. In Bishop Auckland, they thought it was a colliery explosion – until about 10am when cartloads of Hartlepudlians arrived, fleeing the imagined invasion.

Arthur didn’t get that far. His mum bundled him and his brothers a little further inland to an uncle’s house. “A cousin of mine was on his way to school when a milkman with a horse and cart picked up three or four schoolboys and took them up to Hart Village for safety, ” he says. “My father and uncle were looking all round for him because they thought he had been lost or killed.”

In fact, the bombardment killed 123 in Hartlepool (plus another 18 in Scarborough and four in Whitby) including Private Theophilis Jones, 29, of Hartlepool, Corporal Alix Oliffe Liddle, 25, of Darlington, and Private Walter Rogers, 25, of Bishop Auckland. They are officially the first soldiers to die on British soil in “the Great War”.

The whole nation was rocked and roused. Now, no one felt safe in their beds, and young men rushed to sign up to protect their families.

The attack on Hartlepool ended at 8.52am when the battlecruiser Seydlitz fired her last shell and disappeared quietly with her companions, Moltke and Blucher, back into the mist.

About teatime, Arthur’s family realised the coast was clear and returned home to clear up the mess in the living room. Now he and a stopped alarm clock, plus a couple of bits of saved shell souvenirs, are all that remain of that historic day.

“I’ve never had a pair of jeans in my life, ” says the great-grandfather, putting his hands together in prayer, “but I’m eternally grateful for the genes my parents passed on.”