Illustrating the impact of war 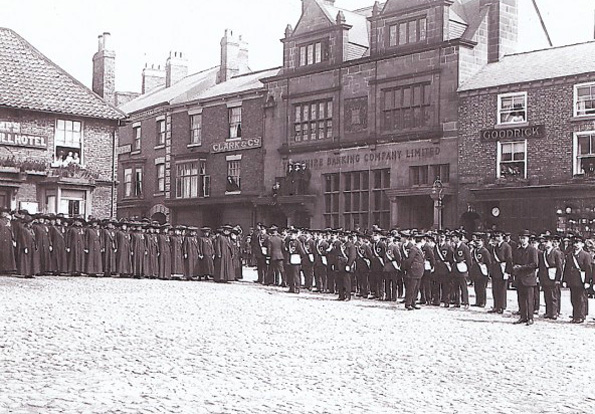 LOOKING BACK: Thirsk residents attend the Military Sunday ceremony in the Market Place before the outbreak of war in 1914

FOR members of Churches Together in Thirsk, marking the centenary of the outbreak of the First World War was about more than honouring the 137 men from the town who died on the Western Front.

The anniversary also represented an opportunity to reflect on how the conflict had affected the wider community, dividing families and neighbours and changing women’s and children’s lives forever.

Geoff Sewell, who helped organise a series of events on a limited budget, including an acclaimed exhibition titled Choices 1914, said the programme provoked a lot of thought and interest, attracting people from Durham to West Yorkshire. 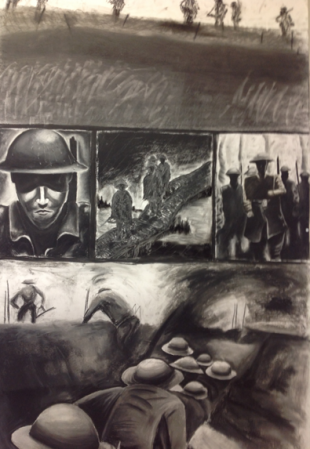 NEW PERSPECTIVES: A collaborative artwork by Thirsk School and Sixth Form College pupils, which was displayed at the Choices 1914 exhibition

He said the events had started on August 3 with a reflective service for peace and justice at St Oswald’s Church, Sowerby, to mark the centenary of Germany invading Belgium and Britain issuing its final ultimatum.

More than 500 people, including members of the Royal Artillery, based at Alanbrooke Barracks, Topcliffe, attended a candlelit service in the Market Place at 10.30pm, the following day.

At 11pm, the candles were blown out, followed by a minute’s silence and the last post, in an echo of Sir Edward Grey’s comment: “The lamps are going out all over Europe. We shall not see them lit again in our time.”

Mr Sewell said: “It was a very strong reminder to the soldiers and the people of Thirsk of the consequences of war.”

Mr Sewell said the events, designed to provide a different focus to those held on Remembrance Sunday, had triggered widespread community participation, including children, with more than 100 contributors to the exhibition alone.

The week-long exhibition at the Friends Meeting House, in Thirsk, contrasted the advocacy and experience of war with those who objected to it.

It showed how in 1914, there was still a choice for men, and despite anti-war demonstrations in Thirsk, 80 per cent of men joined up.

Nationally, 16,000 became conscientious objectors, with 16 of them imprisoned in Richmond Castle.

Choices 1914 featured a list of the men named on nearby war memorials, alongside the battles in which they died and sections about patriotic parades and conscientious objectors in the area.

It also detailed how about 1,400 soldiers from the town went off to fight and 137 were killed in action, while scores of others never returned and many of those who did struggled to find employment, with the jobless rate in Thirsk soaring to 17 per cent in 1921.

After decades of stability in the population of Thirsk, those researching the exhibition found the 1921 census recorded 200 fewer men in the town than there had been in 1911.

The majority of the other exhibits, such as poetry or illustrated stories about how families were changed forever, were by or about women and children, which were contributed after organisers of the exhibition issued an appeal for contrasting views of the war.

Choices 1914 also showed how the conflict sparked an unprecedented recruitment of women at the town’s factory, Bamlett’s, to melt down railings and make screw pickets to support barbed wire for Western Front trenches, as well as castings for gun carriage wheels.

Many of the jobs they took had previously been a male preserve, but after the war ended many of the women were made redundant as the plant reverted to manufacturing agricultural machinery. With up to 200 female domestic servant redundancies, there was female unemployment in the town for the first time.

The display also showed how confectioner and Quaker Arnold Rowntree had secretly funded the Union of Democratic Control protest movement.

It highlighted a letter detailing the union’s aims, signed by the future Labour prime minister Ramsay MacDonald and Charles Trevelyan, one of the three Liberal ministers who resigned over the use of the royal prerogative to send Britain to war.

Mr Sewell said the exhibition had been warmly received, with academics stating it provided a unique and unusual insight into the conflict.

“We were trying to balance the terrible catastrophe that happened to the men with the experience of women and children — we were trying to appeal to the head and the heart.

“After seeing the exhibition, visitors drew parallels with current issues and were wanting to talk about Gaza.”