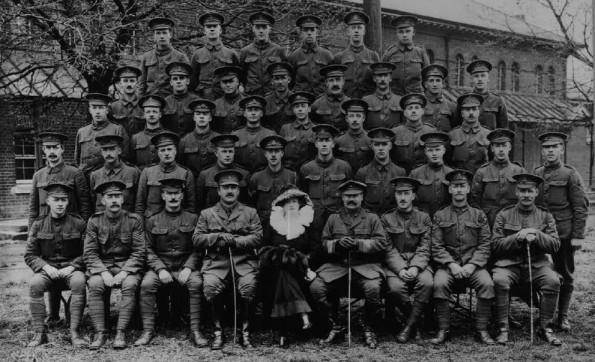 The Earl and Countess of Feversham with officers, NCOs and men who enlisted in the 21st King’s Royal Rifles Corps from Helmsley, before they left for active service in May 1916

A COURAGEOUS earl who died while standing up to rally his troops in the “unadulterated hell” of the Somme battlefield is to be honoured with a commemoration service.

The Archbishop of York Dr John Sentamu will join the Feversham family and parishioners at All Saint’s Church, Helmsley to mark the 100th anniversary of the death of Lieutenant-Colonel Charles William Reginald Duncombe, the second Earl of Feversham.

The service will hear how the peer and one-time MP for Thirsk and Malton, who was also known as Lord Helmsley, showed outstanding bravery while under heavy machine gun and rifle fire as he led an assault on a German trench, near Flers, on the Western Front.

Witness accounts of his death state he showed “supreme coolness”, walking in front of his troops to signal advances as German troops opened fire from a corn field.

The tin helmet he was wearing, which has a single bullet hole in it, has been kept at his home at Duncombe Park, Helmsley, where 1,200 men were billeted before being sent to fight.

An NCO wrote of Lord Feversham’s death: “He was absolutely the finest officer I have ever served under.

“The men would have done anything for him. It was unadulterated hell where we were. The men responded to his call with a ringing cheer and swept on like a whirlwind. Then he dropped without a word and rolled over. The men halted long enough to know the worst and then they dashed forward once more with sorrow and vengeance in their hearts.”

His granddaughter, Lady Clarissa said: “We hope that this occasion will be a fitting tribute to my grandfather and all those who fought at the Somme. We owe them our life and liberty.

“He did all he could for them, that’s what was so tragic when he was killed.”

Archbishop Sentamu added: “We must never forget the loss of so many young lives in the senseless brutality of the First World War.”