Thrills on the high seas 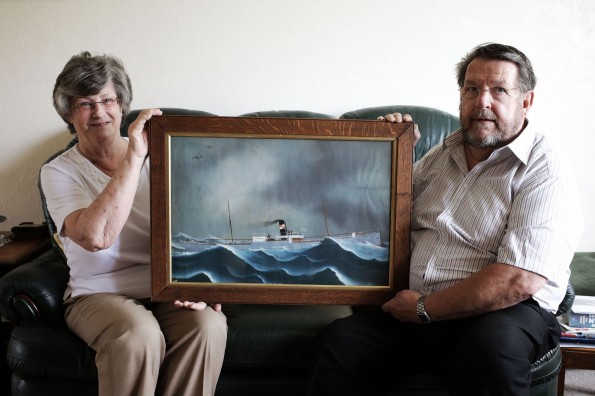 IN THE FRAME: Bob and Pauline Scarre with their painting of the SS Thirlby

THIRLBY is a little village to the east of Thirsk, which sits in the shadow of the Cleveland Hills as they rise up to the North York Moors.

It has an old Scandinavian place name, like so many villages scattered across North Yorkshire and Cleveland. These names follow a formula: the second part “by” means “village”, and the first part is usually the name of the Viking who owned the village.

So Maltby is Malti’s village. Romanby is Hromund’s village. Bellerby is Belgr’s village…

It’s such a nice little formula that when Sir Robert Ropner, the German immigrant who landed penniless in Hartlepool in 1858, started building ships in his Stockton yard in 1888, he named many of them after the Scandinavian villages in his adopted homeland.

As Memories 177 told, 27 of the steamships in “Ropner’s little navy” were sunk during the First World War.

SS Thirlby was one of the 27 to go down, but its name doesn’t quite follow the Viking formula. According to the Oxford Dictionary of English Place Names, Thirlby means “village of thrills”.

Whether Thirlby – population about 130 – lives up to such a billing, Memories cannot possibly say, but as a steamship, Thirlby certainly had a thrilling history… 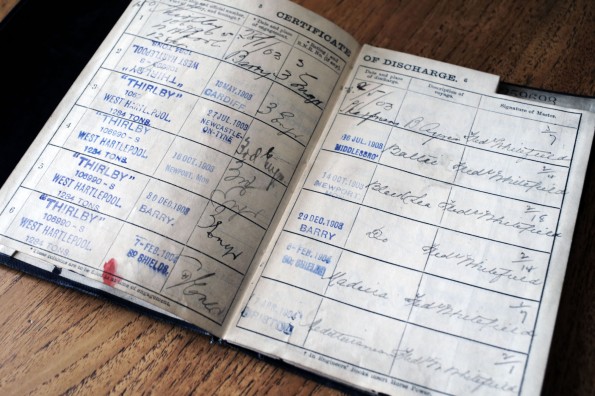 BUILT in Ropners’ own yard in Stockton in 1898, SS Thirlby was trapped for two years when the First World War broke out in the Russian port of Kronshtadt, an island in the Baltic Sea.

Eventually extricated, the ship resumed plying her trade. On April 24, 1917, she was sailing from Bombay to Dunkirk when she came under attack from a U-boat at 7.30am. The crew spotted the telltale tracks of torpedoes coming at them just beneath the water, giving Captain Thomas Hill just enough time to swing Thirlby out of the way.

After missing with three torpedoes, the U-boat popped up out of the water. Thirlby’s crew opened fire with their 12lb Vickers gun on the deck, causing the submarine to hastily dive.

It popped back up again three miles away, out of range of Thirlby’s gun, and began to shell the ship, which took desperate evasive action with all hands getting the engines going as fast as possible for four-and-a-half hours.

The sub fired 150 shells and scored one direct hit, and in reply Thirlby fired 57 shells – the last of which hit the U-boat in the conning tower, and it slunk away.

For their parts in this heroic defence, Capt Hill and three of his crew were awarded Shipping Federation bravery medals.

But, on Thirlby’s next voyage on July 2, 1917, loaded with ore, she was torpedoed 200 miles off the Irish coast, and sank. Two of the crew were killed, and the rest, including Capt Hill, jumped into lifeboats. The submarine surfaced, came alongside the lifeboats and removed their sails, leaving the men to drift to their deaths.

However, a patrol boat rescued them, and landed them safely in Ireland. 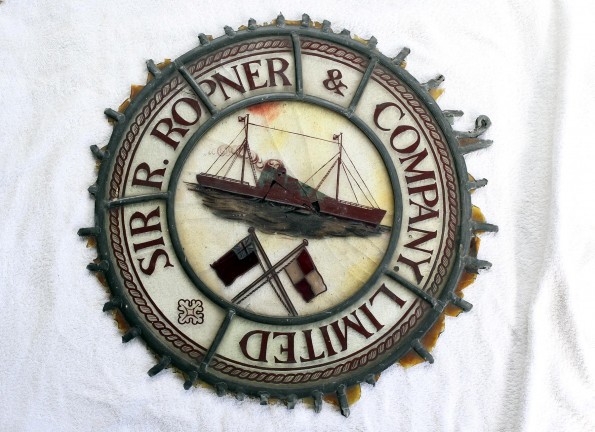 ROPNER’S EMBLEM: The stained glass which came out of Coniscliffe Road, Darlington, and probably originated in the shipping company’s offices in Hartlepool

ROPNERS’ second Thirlby was built in the William Gray yard in Hartlepool in 1928. She was in a convoy of Ropners’ vessels in the Atlantic Ocean which came under submarine attack on April 3, 1941. From 9.45am to 3.15pm, Thirlby dodged all the torpedoes the U-boat could fire, and still managed to pick up survivors from other vessels that had succumbed.

Having survived that extraordinary day, on April 10 Thirlby came under attack again, this time from the air. One bomb destroyed the bridge and killed two men, and Captain Birch ordered his men to abandon ship.

But it was a ruse. Seeing the men take to the lifeboats, the pilot thought the ship was sinking and so buzzed off.

Once the coast was clear, the crew clambered back on board Thirlby and extinguished the fire.

The bomber returned an hour later, so the men again took to the lifeboats. Still convinced that the ship was doomed, the plane flew off. The men returned and soon had Thirlby under way, and she slowly reached the Clyde.

She survived until January 27, 1942, when, carrying maize from New York to Canada to Scotland, she was torpedoed off Nova Scotia. Three of her crew were killed, but the captain, 30 sailors and nine gunners were rescued by a US merchant ship.

ROPNERS’ third Thirlby was bought secondhand from the Ministry of War in 1945. It is the vessel on the 1947 painting. Ropners sold it to Panama in 1956, where it was renamed Guri. It was scrapped in 1966.

BUILT in Sunderland, the fourth Thirlby was Ropners’ first tanker. It was sold to Greece in 1982 where it was renamed Diamondo and scrapped in 1985.

SO John Robert Scarre had a lucky escape. He was born in Derby Street, off Darlington’s North Road, in 1881 and, as would have been expected of someone growing up in that area, spent six years as an apprentice in the North Road shops. 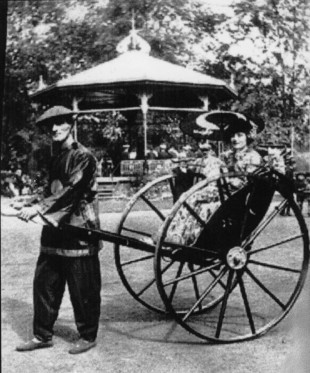 But then, perhaps because of unemployment, he veered off track. In 1903, he joined Ropners’ SS Thirlby as Third Engineer and went to sea.

Sailors were only engaged one voyage at a time, but his family – Pauline and Bob Scarre in Eaglescliffe – still have his logbook which shows he sailed on Thirlby to the Baltic, Black Sea, Madeira and the Mediterranean. Then, in 1904, he sailed on SS Bellerby.

But in 1905, he married, and his life on the ocean waves was over. He came back to the North Road shops and worked as a toolmaker until he retired – and so he missed Thirlby’s thrilling wartime exploits.

IN 1946, after the Second World War, Ropners – founded in West Hartlepool in 1876 – relocated to Darlington in search of better road and rail communications. The company set up its headquarters in 140, Coniscliffe Road, and slowly moved out of shipping and into property and insurance. It became a “mini-conglomerate”, with lots of irons in lots of fires. Strangely, one of these fires was Hozelock gardening products – one of the first hoses that clipped onto taps in a way that prevented water shooting out unexpectedly and soaking the gardener.

Ropners sold Hozelock in 1990 for £24m – the year in which it also sold two ships, meaning it only had three in its fleet.

In 1997, the Ropner family sold the business, and it became part of the Bidcorp Shipping Group, based in Dartford, Kent, which appears to be part of a global investment company.

This meant that 140, Coniscliffe Road was vacated. It was cleared out, and builder Dave Chapman ended up with some prize souvenirs.

There were some Ropner pieces of cutlery, with the line’s famous orange emblem on, and there were beautiful stained glass windows which are believed to have come from Ropners’ original Hartlepool office.

Plus there was a painting of the third SS Thirlby… 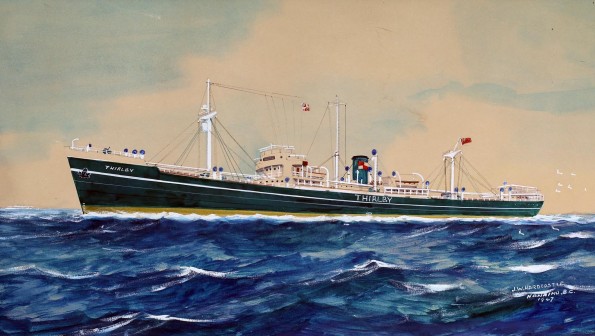 THIRD THIRLBY: Dave Chapman’s picture, which was painted in 1947 by crew member JW Hardcastle in Canada

NO 140 Coniscliffe Road was originally a villa known as Belle Vue. Its earliest resident was Cockfield-born John Dixon, who had been George Stephenson’s deputy surveyor on the Stockton and Darlington Railway.

Dixon died in 1865, and Belle Vue was taken over by John Hardcastle Bowman. He had started out as a young man in the leather trade, riding around the North-East with a blunderbuss for protection, selling his wares. His tanning pits were in Archer Street – which is a punny play on his surname.

Bowman, who had lots of business interests, died in Belle Vue in 1898.

The house then became home to Sir Thomas Putnam, chairman of Darlington Forge and a racehorse owner, and he re-named it Greylands. He died there in 1936, which left the way open for Ropners. 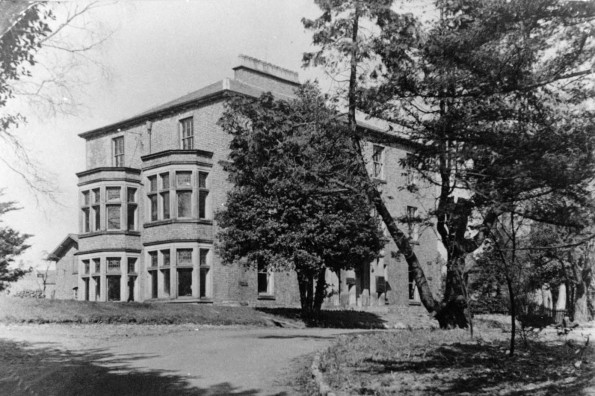 BELLE VUE: Greylands, or 140 Coniscliffe Road, Darlington, which was Ropners’ headquarters for 50 years

Post-Ropners, 140, Coniscliffe Road, has been the headquarters of Clive Owen and Company, a firm of chartered accountants.

PETER CARTER is one of several people to mention that it wasn’t just Ropners’ headquarters which relocated to Darlington after the Second World War.

His father had left school in Hartlepool in 1922 to serve his apprenticeship with Ropners as a sailmaker. In 1946, now foreman, he was asked to move to Darlington with his young family to establish a ship chandlers’ store in Houndgate.

“The store also manufactured tarpaulin covers for the transport industry and other outlets,” says Peter. “One of my happy memories is of attending summer camps from St Mary’s Grammar School (now Carmel), and my father would repair and maintain the marquees and tents.”

Does anyone else remember the ship chandlers’ store?