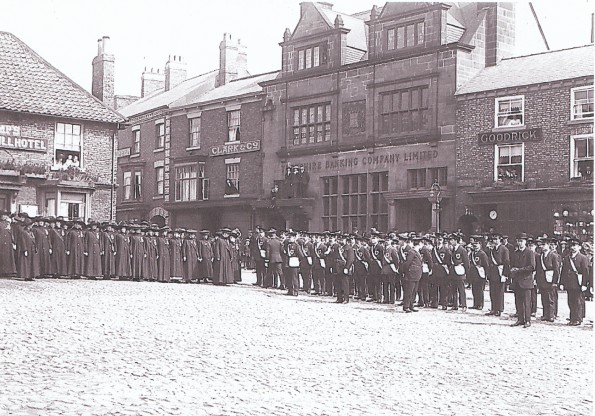 LOOKING BACK: People of Thirsk attend the Military Sunday ceremony in the Market Place before the outbreak of war in 1914

A SERIES of events will be held in Thirsk to mark the centenary of the outbreak of the First World War.

Thirsk Town Council has backed the Thirsk and District Churches Together programme, which includes reflective gatherings in the Market Place and an exhibition to highlight the choices residents of the area faced having to make in 1914.

It is expected that some of the events will attract large numbers of people, particularly as it is understood the town is the only place in the area planning to hold public events to mark the anniversary.

Churches Together chairwoman Heather Limbach said the events had been designed to provide a different focus to those on Remembrance Sunday.

She said: “It is not just about those who have fallen, it is how the war impacted on local people and families.”

Members of the Royal Artillery, based at Alanbrooke Barracks, near Topcliffe, and people whose friends and families were affected by the First World War in the Thirsk area will be invited to attend.

The programme starts on Sunday, August 3 – the 100th anniversary of Germany invading Belgium and Britain issuing a final ultimatum – with a non-denominational service at St Oswald’s Church, Sowerby.

The following day, Monday, August 4, from 10.30am to 11am, the town’s Royal British Legion band will perform by the clock tower, ahead of war poetry readings by sixth-form pupils at Thirsk School, the Last Post and a minute’s silence.

Twelve hours later a candlelit reflection, featuring a solitary bugler, will be held in the Market Place to mark the day Britain declared war on Germany.

A week-long exhibition in the QuakerMeeting House, in Kirkgate, starting on August 4, will feature a list of themen named on nearby war memorials alongside the battles in which they died and sections about patriotic parades and conscientious objectors in the area.

Organisers of the exhibition are appealing for family histories and photographs from the time to highlight contrasting views of the war.

Women were employed at Bamletts factory, in Station Road, tomelt down railings to make screw posts for barbed wire entanglements, while others served in Thirsk Voluntary Aid Detachment, tending to wounded soldiers in Thirsk and Sowerby Town Hall.

However, the town was also the scene of anti-war protests and editions of the Darlington and Stockton Times highlight the contemporary fear of German invasion.