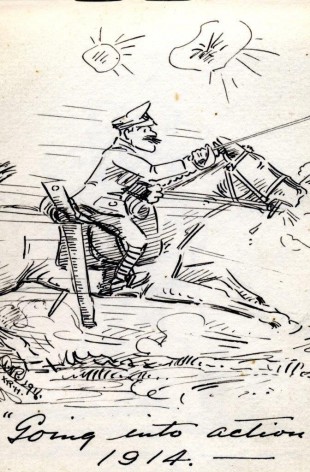 CARTOONS created by a soldier as he served on the Western Front are revealing more of the dark humour of the First World War.

The sketches were drawn by Albert E V Richards, who is thought to have served with the 10th Royal Hussars as a lance corporal.

Drawn “somewhere at the front” in 1916, they are believed to be based on his own personal thoughts and experiences of being at war.

The sketchbook book was donated to York’s Castle Museum in 1977 but little is recorded about who the donor was. There is also little about the artist apart from his name and his regiment.

Among the issues they feature are the optimism of going to battle in 1914 compared to the resigned gloom of 1916, the difficulties of putting out barbed wire and comic look of wearing a gas mask.

History curator Alison Bodley said: “These cartoons offer us a real insight into one man’s experience of being on the front line. 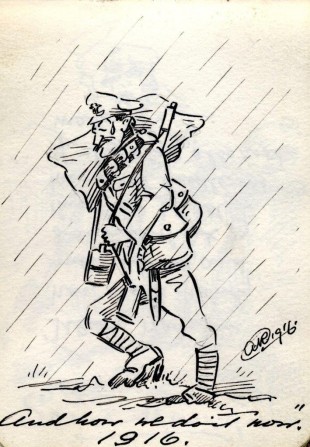 “They show the ‘stiff upper lip’ humour that many soldiers used to help them get through the horrors of war, the awful conditions and the boredom that affected so many of them.

“We know little about Richards but he was clearly a gifted artist and also a great observer of what was going on around him.”

The sketchbook will feature in the major new First World War exhibition at the Museum: 1914: When the World Changed Forever, which opens on June 28.

The exhibition is part of a £1.7m project at the museum, made possible thanks to a £1,167,900 grant from the Heritage Lottery Fund.

Although the artist is a bit of a mystery it is believed he was based for a time at Verdun.

Papers show he was discharged in February 1919 and given the silver badge which was worn by men to show they had a legitimate reason for not being in the armed forces. 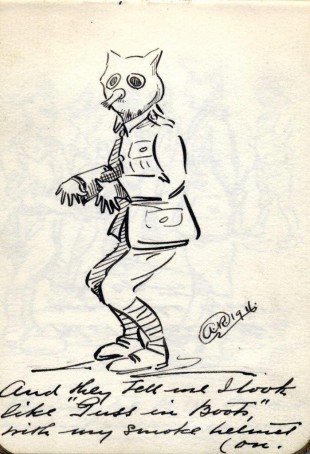 GRIM HUMOUR: “And they tell me I look like Puss in Boots with my smoke helmet on”

The museum is now keen to hear from anyone who believes they have more relevant information on Richards and his cartoons. They can be contacted by emailing robert.wake@ymt.org.uk

The exhibition opens 100 years to the day the Archduke Franz Ferdinand was assassinated and the fuse for war was lit.