‘Your son was a model of an English officer and gentleman’ 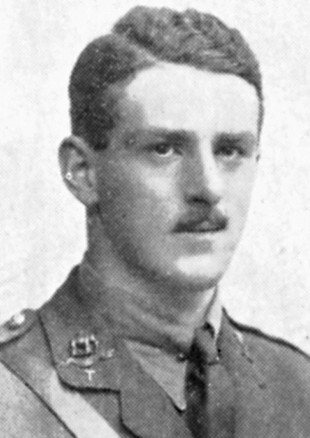 Norman was the younger son of William Atkinson Procter and Rebecca Procter of the Manor House, Rylstone. They owned much land in the area as part of the Cracoe Estate and were local benefactors. Norman was educated at Gresham’s School, Holt, in Norfolk, and joined the forces in November 1914, receiving a commission in the 6th Battalion West Riding Regiment.

The Battalion had been heavily involved in stemming the German offensive on the River Lys in early April 1918, suffering many casualties, but by April 25 they were in the vicinity of Poperinghe in Belgium and entering the front line, near Kemmel, on the Messines Ridge. Digging their line under continual shell fire, the Battalion was not attacked until the 29 when the Germans made desperate efforts to break the whole line. The shelling,mostly from big guns, lasted incessantly from 3am to 4pm and was the heaviest ever experienced by the Battalion. In the attack that followed, the enemy had to be driven out of the trench by a bayonet charge.

Norman Procter had been wounded by shell fire in the left shoulder and chest and was admitted to the 3rd Australian Casualty Clearing Station. He died from his wounds on May 2, 1918, and was buried in grave II.B.15. Esquelbecq Military Cemetery. His Commanding Officer wrote, “Your son was a model of an English officer and gentleman. As regards his work, I cannot speak too highly of him; he was most able and devoted to his duty; he was of the greatest assistance to me and my commanding officers and I shall be quite unable to replace him. Your son died doing his duty in a way that could not have been done better. We sadly mourn his loss.”

By the end of April Ludendorff called off the offensive. No breakthrough had been effected and the Channel ports were safe. The cost had been great, another 100,000 British casualties – but again, German casualties were almost as great.

The next fatality from these dales occurred far away from the Western Front, at Salonika, to the north of Greece. Bulgaria had entered the war in August 1915 on the side of Austro-Hungary and her ally Germany, with its main aim of attacking Serbia and so regaining part of Macedonia which Serbia had seized from Bulgaria in 1913.

The Greeks, and an Anglo-French force despatched from Gallipoli, were too late to help the Serbs, being pushed back by the Bulgars onto the port area of Salonika.

Evacuation made good military sense but, after the Gallipoli disaster, it would have been unthinkable, politically. So an Allied force of Serb, Greek, British, French, Italian and Russian contingents held the Salonika area more or less passively until 1918. The inaction of the Allies resulted in the Germans referring to the enclave as their “largest internment camp”, and with 500,000 Allied troops in the area, such a description was possibly justified.

Words and pictures from Swaledale & Wharfdale Remembered by Keith Taylor
(A reprint of the book is available at £25.00 post free from www.countrybooks.biz)