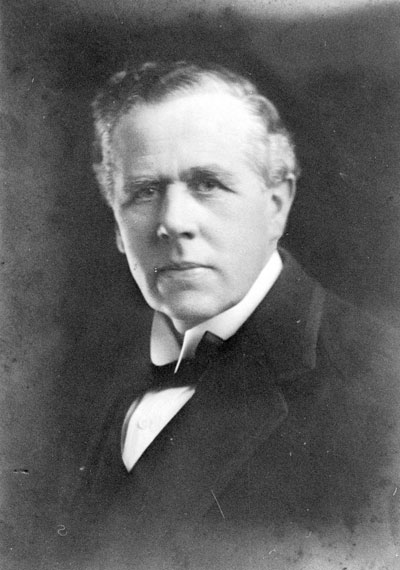 Statesman: MP Herbert Pike Pease who asked questions in the House of Commons. A warship was eventually sent to Venezuela

EDWARD and James Lyall grew up in Darlington. Their family home was in Vane Terrace; their father’s office was in Northgate; they attended the local grammar school.

After these ordinary beginnings, both brothers sought foreign adventure in South America. One was assassinated by a knifeman at the height of a civil war. The other rushed to his rescue along the alligator-infested Orinoco River, but had to retreat when his own life was at risk.

He sailed home through a hurricane and then went to war, spending two years doing brave deeds on the Somme in the company of his horse called Jess.

The lives of the Lyalls sound like something out of a Boys’ Own storybook. The first chapter begins in deepest Darlington when Edward, the eldest brother, was born on June 14, 1869. He was named after his father, Edward Whyte Lyall, who was a surveyor and valuer.

James was born eight years later and, after schooling, both boys went into industry.

Edward became a mining engineer, working at a number of collieries and for Bolckow Vaughan in the ironstone mines of Teesside. In October 1898, his chance of adventure came, and he accepted a post as constructional engineer to the Demarara Railways of British Guiana in South America. He set sail at once.

James forged his career in shipping, working in Liverpool for the owners of American, Black Sea and Danube steamers. In October 1898 – the same month as his brother – his chance of adventure came.

He was chosen out of 1,100 applicants to be the British Vice-Consul in the town of Ciudad Bolivar in the heart of Venezuela in South America. He set sail from Southampton at once.

James’ initial impressions of his new home were favourable and he sent a long despatch back to the Darlington and Stockton Times in 1899 which was headlined “A Darlingtonian in South America”.

He told of his 300-mile journey by steamer from Trinidad up the Orinoco River to Ciudad Bolivar. Native Indians wearing nothing but loin cloths paddled out to the steamer “and the passengers throw them biscuits and empty bottles and tins which they seem to appreciate”.

He said Ciudad Bolivar, a town of 10,000, was on a rock above the Orinoco where the river narrowed – its old name was Angostura which means “narrows” and here the Bitters so beloved of gin drinkers was invented in 1846.

He dined on turtles’ eggs and roast monkey, and sauntered along the riverfront where the house balconies were “generally occupied by senoritas to whom the young men make love, avoiding the ordeal of courting indoors under the customary supervision of the young lady’s mother or other old dame”.

But his long letter home finishes with the observation: “There is not a great deal of social life, families and friends being so disorganised by the revolutions which take place almost annually.”

Within a year, James was dead, caught up in the revolution of 1900. He was leaving home one February night “when he was fatally stabbed to the body by a drunken villain”. He died in the arms of his boss, the British Consul Mr C H de Lomas.

The initial reports that filtered back to his father in Vane Terrace in late March suggested that there had not been “the slightest provocation for the dastardly deed” and that the drunken knifeman had attempted to slice up two other people before James got in his way.

Immediately after the killing, Mr de Lomas telegrammed Edward in British Guiana. All the advice Edward received told him not to go to Venezuela, but he felt he had to honour the memory of his slain brother.

He retraced James’ route down the Orinoco, collected a few of his personal items in Ciudad Bolivar, but then as the civil war got worse, the warring natives closed in on him.

They threatened to take him hostage, but he escaped and somehow made it back up the Orinoco, suffering greatly from sunstroke on the way.

Rather than return to British Guiana, he made for Barbados and then aimed for New York. But his steamer sailed into a West Indian hurricane and very nearly sank. Battered and broken, it limped into New York some months later.

Meanwhile, back home, James’ death had become an international incident. Darlington’s MP Herbert Pike Pease asked questions in the House of Commons about the killing, and it became clear that this was more than just a random attack.

The House learned that Venezuela was in the grip of its annual civil war and one faction, who felt keenly the indignities of their repression by their Spanish colonial masters, sided with the Boers who were fighting a war in South Africa against Britain’s colonial expansion.

James wasn’t a random victim. He had been assassinated because he was a high-ranking British official.

Pike Pease demanded that the British Government put pressure on the Venezuelans to bring the assassin to justice. He demanded that Britain sought compensation for the loss of its valued citizen.

The mandarins in the Foreign Office said they were doing all they could, and in August 1900 despatched the warship HMS Alert down the Orinoco River just to remind them who the real power was.

It did the trick. A couple of days before Queen Victoria died in January 1901, word reached Darlington that the unnamed assassin had been sentenced to 11 years penal servitude. The British Consul was happy with this result because the maximum sentence in Venezuela was 12 years.

The Consul concluded his short telegram by saying that “the motive for the deed seemed to be political animosity”.

There was no mention of compensation.

Edward arrived back in Britain from New York and began rebuilding his career working for his father in Darlington. Together they planned Horden Colliery and the village of Horden.

Edward became manager of Barton Quarries and moved to the village just outside Darlington. It seemed as if his South American adventure had satisfied his desire for foreign excitement.

But in 1914 the First World War broke out. Within hours of the commencement of hostilities, aged 45, Edward had volunteered for service. He was immediately sent into action at Ypres on the Somme but soon the Army learned of his mining skills and attached him to the 185th Tunnelling Company of the Royal Engineers.

In 1916 on the Somme his company was caught in a gas attack in a tunnel. Under heavy fire, the brave soldier dashed through a flooded gallery in the dark to reach breathing apparatus, only to find it all in use.

“He hurried on and, although in an exhausted state, descended a shaft without any apparatus, assisted in the rescue of an officer, and then went further, rendered aid to two men and made a most gallant effort to save two officers,” said his citation as he was awarded a Distinguished Service Order.

The Northern Echo said all the people of Barton “will admire the exploit which won for him a coveted distinction and will join in congratulating him upon his safe return from his heroic plunge into the deadly gallery and perilous descent into the shaft, and upon the recognition of his self-sacrificing courage by His Majesty the King”.

The lieutenant was promoted to the rank of major and spent the rest of his war blowing up bridges behind enemy lines to annoy the Germans.

Best of all in this chapter is the role of his favourite horse from Barton. A newspaper report said: “His pet charger, Jess, was taken to the front with him on his mobilisation and remained with him throughout the war, sharing many of his thrilling experiences.”

Jess and Edward were demobilised in 1919. We know not what happened to Jess, but Edward settled into his more mundane roles as managing director of Barton Limestone Quarry and chairman of Rainton Colliery.

In 1922, aged 53, he married Dorothy Ethel Button of Warminster, and in the following eight years they had three daughters and a son.

Major Edward Lyall DSO of Barton died in September 1929 and, in the words of his obituary in The Northern Echo, so “closed a life full of adventure and a career which had won the admiration and esteem of a large number of people in the North-East”.

If you know what happened to Major Lyall’s children, or have any further details on this remarkable story, please write to Echo Memories, The Northern Echo, Priestgate, Darlington DL1 1NF. E-mail clloydnen.co.uk or phone (01325) 505062.