Tracing the life of a Hurworth schoolteacher 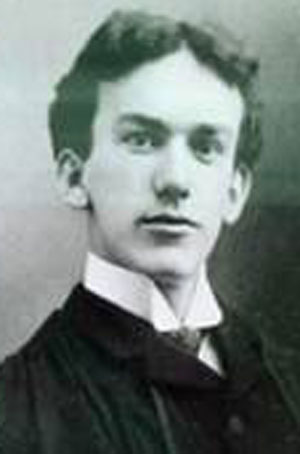 With the help of Stephen Erskine, Echo Memories traces the life and death of a Hurworth schoolteacher.

LIEUTENANT John Gill Appleby “Died Splendidly!”, according to the headline in The Northern Echo on August 9, 1916.

But the death, on the Somme, of this 30-year-old Hurworth schoolteacher was probably not that splendid. In all probability, it was horribly ordinary.

In its report, the Echo tries to glamorise it.

“On July 15, he was reported missing, but it is now intimated that he was killed on the day whilst charging splendidly at the head of his men, ” it says.

But John was blown apart by a German shell as he waited forlornly for reinforcements amid the bombedout ruins of a small French village.

His name appears on the memorial in All Saints’ Churchyard in his home village. It is a humble memorial, a stone cross and a tablet with room to record the names of the 39 men from the Hurworth and Neasham area who fell in the Great War.

His name also appears on another memorial, one arguably grander and certainly much larger in scale. His is one of the 73,077 names carved into the walls of the Thiepval memorial in Flanders, names of men whose bodies were never recovered from the battlefield, names of men whose final resting place is “known only to God”.

All these bodies unfound despite the Flanders fields for miles around being full of cemeteries containing the remains of men whose bodies were recovered and whose final resting places are known to the most advanced computer search engine on the Internet.

Of our one name, we know John Gill Appleby was born at Hurworth-on-Tees on Sunday, February 28, 1886, the eldest son of James, a gardener, and Isabel, his wife (she was originally from High Coniscliffe).

The 1901 census tells us they were living at 139 Main Street, Hurworth, with their other children – Hannah, aged 12, Arthur, nine, and Edith, seven.

John attended school in Hurworth from 1892 to 1899 – presumably the one opposite the village Spar shop which is now a couple of houses.

From 1899 to 1901, he went to the Central School in Darlington, before going to the Pupil Teacher Centre in Vane Terrace, Darlington (now the Arts Centre).

“At the latter institution, he had a remarkably successful career, being placed first in England at the Boys’ Scholarship Examination in December 1904, ” said the Echo.

From Vane Terrace, the gardener’s son went to Nottingham University.

He graduated in 1908 with a second-class Bachelor of Science degree.

John Appleby BSc returned to Hurworth, where he got his first job in the village school. In fact, his professional career followed the same path as his school one as his second job was at Central School, in Darlington. 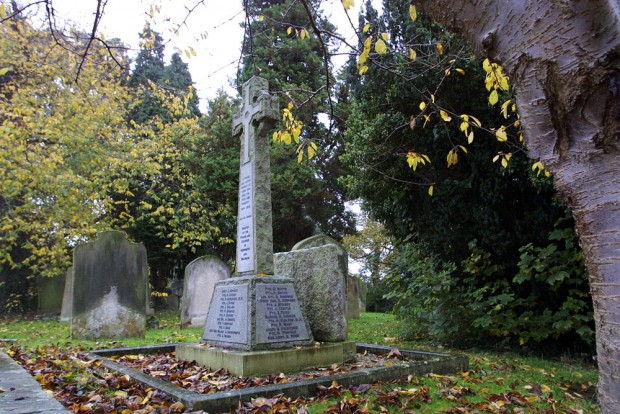 Hurworth hero: The war memorial in All Saints’ churchyard in Hurworth which includes the name of Lieutenant John Gill Appleby, right, killed at Ovillers in the First World War

In 1910, he moved south to take up a position as form master and teacher of mathematics and science to the upper third at Wyggeston Boys Grammar School, in Leicester. His salary was £150-a-year.

The headmaster, the Reverend James Went, issued form masters with guidance that said they should be in the playground at intervals to “prevent anything like roughness”.

“They must guard against nagging a boy, and avoid mild sarcasm, and above all they must abstain from smiting the boys.”

At Wyggeston, said the Echo, John’s “quiet, thorough and conscientious work in the teaching of mathematics and science made a lasting impression on those boys with whom he came in contact”.

The life of the schoolteacher from Hurworth was caught up in the blast.

In December 1914, he was commissioned into the 8th Battalion, South Lancashire Regiment (Prince of Wales’ Volunteers).

His school magazine, The Wyggestonian, announced his departure with “Sorrow and Pride – that combination of sentiment so prominent nowadays” especially as “Mr Appleby will long be remembered in the Lab. , where his searching care has saved many a boy from a chemical death”.

The following September, he embarked for France and was stationed near Armentieres, around the infamous Ploegstreet Wood, known to British soldiers who struggled with the Flemish tongue as “Plugstreet Wood”.

It was here, on Christmas Day, that German and British soldiers crossed into no man’s land, exchanged gifts, sang carols and played football.

For John, the opening months of the war were mercifully quiet, but on New Year’s Day his battalion was moved up to Creslus Farm where, on January 4, it came under heavy shell fire.

Between 3pm and darkness “some 500 shells of all calibres fell on 8th Battalion positions”, according to the battalion history. The men were relieved after a couple of days and moved on for further training and inspection by Lord Kitchener.

On March 28, they arrived at the front line to the east of Neuville St Vaast, where a relentless bombardment began upon them. It lasted until May 5, with a “daily toll of casualties”, when they were relieved.

John returned home “on short leave”. It would prove to be the last time he saw his family.

He was sent back into the Somme valley. The plan was for a great attack that would smash open the German lines.

It began smoothly enough, as at 4am on July 8, John’s battalion moved out of its trenches and took the Germans’ positions “practically without opposition”. 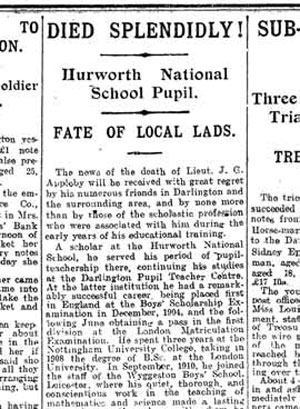 The report of John Appleby’s death from The Northern Echo of August 9, 1916

Attention then switched to the strategically-important village of Ovillers on a spur of land that jutted out over British positions.

From the village, the Germans had a wonderful view over British lines for miles around.

At 5.30am on July 9, John’s battalion launched a bombing raid on the Germans. Two platoons attacked from different directions, but were repulsed.

At 8pm, they were ordered to make a further attempt, a “determined rush across open ground”. But the heavy rain had churned the ground into a quagmire. A rush, no matter how determined, was impossible, and the “moment the first waves left the shelter of their own trenches, they were swept by accurate machine-gun fire from Ovillers, ” says the battalion history.

“The attack failed with heavy casualties.”

Fortunately for our Hurworth schoolteacher, his company was not involved in the illfated rush, but his day was coming.

Still the Germans rained down artillery on his position and his commanders resolved to do something about it.

On the night of July 12/13, the battle to capture Ovillers began.

It was a battle that raged for three days. The British forced the Germans out of the village and the 8th Battalion crept in amid the ruins of the houses.

But the Germans wanted the high ground back. So fiercely did they fight for it that they delayed the Lancashire Fusiliers’ advance on the right.

This left the 8th Battalion cruelly exposed in the rubble.

The Echo of the day said he was “charging splendidly at the head of his men”. The battalion history said it “held on grimly to its positions amid the ruins of Ovillers despite counterattacks by crack Prussian Guard Fusiliers”.

Two days later, Ovillers was secured by the British, and John was reported missing.

Over the weekend of August 5, his parents, James and Isabel, of The Green, Hurworth, learned the worst, and they placed his death notice in The Northern Echo on August 7.

They concluded it with the words: “Deeply mourned by all.”

If you have a few moments tomorrow, please spare a thought for him.