The heroes of Cumberland Street 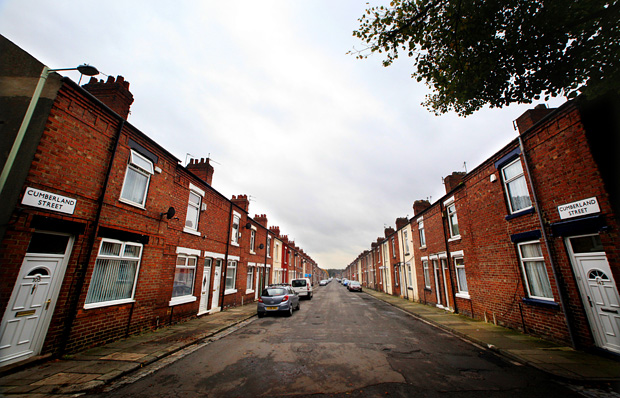 Cumberland Street, in Darlington, epitomises the extraordinary sacrifice of the Great War

Cumberland Street is a very ordinary North-East street. It is a series of two-up two-down terraces built in mid-Victorian times to house industrial workers.

It is in the north end of Darlington, and many of its male residents worked in the North Road Shops building railway rolling stock while the womenfolk stayed at home bringing up the children in cramped conditions.

But with the open spaces of North Park at the top of the road, Cumberland Street residents perhaps had a leafier life than some of their working-class contemporaries.

Then the First World War came.

The telegram boys bringing the dreaded news of the death of a son or a husband came to know Cumberland Street better than any other street in Darlington. They knocked on 13 of the street’s 124 doors to deliver the awful tidings.

Using Stephen Nicholson’s research, these are the victims of the street at war.

Stephen Nicholson has spent ten years building a database of the 1,065 soldiers from his hometown of Darlington who perished in the First World War.

It is an extraordinary piece of work which The Northern Echo is in the process of turning into a searchable online database. It will be the centrepiece of our commemorations of the centenary of the war. 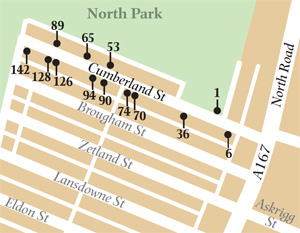 The homes of the soldiers of Cumberland Street, Darlington

Edward died in a military hospital in Tranmere, having been evacuated there from the battlefield – his battalion was involved in heavy fighting around Ypres throughout 1918. He was buried in Darlington’s West Cemetery on February 25.

Albert was born in Wandsworth, London, but before the war worked as a labourer in the North Road Shops and lived in Cumberland Street with his wife, Mabel, and their son. Their house appears to have been demolished. His Tyneside Irish battalion was involved in action near Arras in northern France for much of April and Albert appears to have been killed by a sniper. He is buried at Roeux just outside Arras. 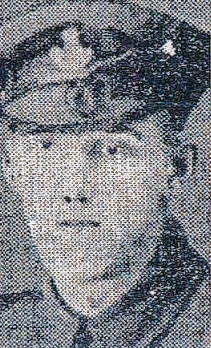 Harold, a Yorkshireman by birth, was a railway boilersmith, probably in the North Road Shops. He enlisted in the Territorial Army on April 23, 1912, and was wounded in the right leg on April 26, 1915. He recovered and carried on fighting. The DLI diary of action near Ypres during March 1916 says: “From the 19th to the 24th, the situation was quiet as far as artillery activity was concerned, but snipers, trench mortars and rifle grenades worried us considerably.” It was one of those that did for Harold at the infamous Hill 60 – an exposed spoilheap made of soil from a nearby railway cutting, and he lies in the Railway Dugouts Burial Ground, Ypres.

Frederick, who left a widow, had served in France for six weeks – his corps supplied the frontline with ammunition and maintained weapons – before being transferred to Salonika in Greece, where he died of malaria. 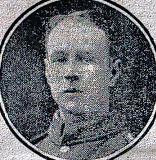 Charles worked at Jacques and Jacques, a furniture store in North Road. He was married to Frances and had two daughters. At 8am on April 22, the DLI 14th Battalion attacked German trenches near Loos, which had been blasted almost flat by British heavy guns. Snipers were holed up in nearby houses, taking pot shots. When the battalion stood down, it had lost one officer and 34 men, ten officers and 173 men were injured, and 24 men were missing. Charles was one of the missing, and his body was never recovered. 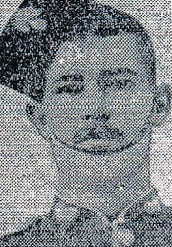 William worked as an air driller for the North Eastern Railway, probably at the North Road Shops. He was killed, probably by a bomb in Slag Alley, at Vermelles, near Loos – very close to where Charles Chapman from No 65, Cumberland Street died 18 months later.

George was the second of five sons of a railwayman. He was in the Labour Corps – a force of 400,000 men, many of whom were not fighting fit. His unit remained in Britain, and he died of either accident or disease.

Ernest enlisted at the start of the war and had been injured once. On October 26, he was fighting in atrocious weather near Ypres. Zero Hour was 5.40am when the British left their trenches and attacked, creeping forwards 50 yards every four minutes under heavy fire. At the end of the day, the enemy had reoccupied all of the ground, and the battalion had lost 11 officers and 43 men killed, 150 wounded and 53 missing. Ernest was buried at Poelcapelle, Ypres. He left a widow, Annie.

James, a council apprentice plumber, lived with his parents in Cumberland Street. He joined the territorial army in April 1912 at 18 and was mobilised the day war broke out. He was far from a model soldier: before he went to the Western Front in April 1915, he had been confined to barracks seven times. He lasted only a month on the Somme, dying at Sanctuary Wood, Ypres – the first time poison gas was used against the 5th DLI. His body was never recovered. He is commemorated on the Menin Gate. 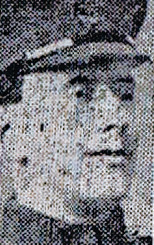 Herbert worked as a waiter at the King’s Head Hotel and lived with his wife, Theresa, and their son and daughter in Cumberland Street. A couple of terraces away in Lansdowne Street lived his parents – he was their only son. He died in the trenches near Ploegsteert, near Ypres, possibly during a raid on the enemy lines. He was buried at Mesen in Belgium.

This map shows where each Cumberland Street soldier died

Harold, from a railway family, had worked as a fitter at North Road Shops before he enlisted on December 10, 1915. He was killed during an advance near Albert, on the Somme, and his body was never recovered. He left a daughter, and his widow, Margaret, received a weekly pension of 20s 5d.

Before the war, Lawrence was an iron moulder at the Whessoe Foundry. He enlisted in Stockton as the 5th Battalion was being formed, and went out to the Western Front just weeks before he was killed near Ypres. His body was never recovered, and he is commemorated on the Menin Gate.

Percy worked as a turner in a foundry before the war and moved into No 142 with his wife, Jane, and their three children. The DLI’s diary of September 16, 1916, makes the action he was involved in sound insignificant. “A small attack was made but was held up by machine gun fire from an enemy strongpoint.”

Then it lists the casualties: 32 men, including two officers, killed, 99 wounded and 34 missing. One of the missing was Percy, and his body was never recovered. He is commemorated on the Thiepval Memorial, on the Somme.