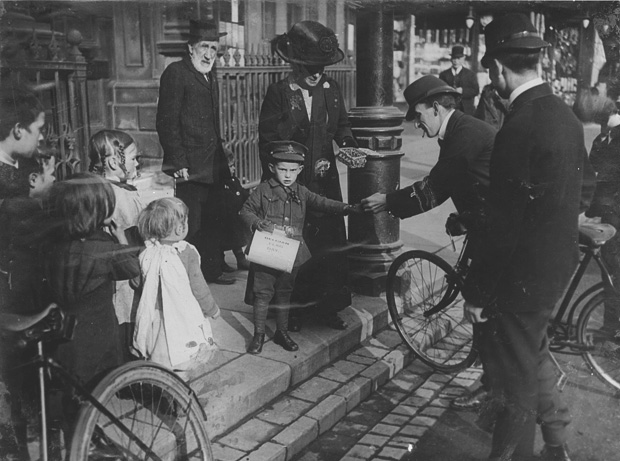 A postman buys a Belgian flag from a young refugee on Darlington’s High Row, probably on Saturday, October 24, 1914

WHEN the First World War broke out, Belgium was a small and comparatively new country. It was formed in 1830 with Britain promising to protect its borders.

When, in August 1914, the German Kaiser marched into this tiny, proud and neutral nation, the British knew that war was imminent.

The Germans inflicted Schrecklichkeit (terror) on the eight million Belgian citizens. Twenty per cent of them were made homeless; many more fled.

Famously, 6,000 of them, including 1,200 children, arrived in Birtley, to the north of Chester-le-Street.

They were put to work in a munitions factory, and had their own village built for them. It was called Elisabethville, after their queen, and it included their own schools, churches and even a gendamerie.

It was very much a closed community, surrounded by fences, and no Belgian was allowed out of Elisabethville without an authorised official pass.

With peace, in 1919, the Belgians returned home. All that is left of them in Birtley are 13 graves in the town cemetery and a smattering of foreign surnames in the North Durham phone book – suggesting, at least, that the night-time security on the fences around Elisabethville was not all it might have been.

The Belgians of Birtley have been pored over by academics from Durham University, but the Belgians of South Durham and Darlington are far less well known. In fact, Echo Memories only stumbled upon them three weeks ago when we printed a “mystery” picture.

On Tuesday, October 20, 1914, the 7.07pm train pulled into Bank Top station, Darlington, bearing 130 Belgian refugees. A huge crowd had gathered to see the first victims of a war that all still believed would be over by Christmas.

“When the train drew into the station, a rousing cheer arose from the people on the platform and was taken up by the crowds outside the barriers,” reported The Northern Echo.

The refugees emerged and, carrying their worldly goods in little bundles, were placed in a convoy of cars which the townspeople had lent for the occasion. Twelve Belgians were despatched to Stockton; 18 went into the care of Darlington’s Catholics; the remaining 100 fell on the mercy of the Mayor’s Committee.

“As these drove out of the station, hats, sticks and handkerchiefs were waved and a full cheer arose from the thousands of people who lined the streets,” said the Echo.

The convoy weaved its way through a packed Skinnergate to the Mechanics Institute, where “a liberal supper” had been laid on.

The refugees’ ages ranged from a couple of months to 82 years. They came from all social classes.

“One little girl of three or four is the representative of a family of ten, the others having been either killed, taken prisoner, or driven away when the Germans entered Malines,” said the Echo.

“The little one, who was left alone, was picked up by another family and brought along with them.”

After the meal, the Belgians dispersed. Leading townspeople had offered accommodation: Thornfield in Carmel Road became a dormitory, as did the West End mansions of Oaklea and Woodlea. A councillor had offered his holiday home in Redcar; another his cottage in Arkengarthdale. Fifty were to be accommodated in Gainford Academy, and Robert Summerson found space for 20 in Coatham Hall, Coatham Mundeville.

All of which cost money, because the poor Belgians possessed no more than they stood up in. On the Saturday after their arrival, a Belgian Flag Day was held in Darlington town centre.

The Belgians arrived – mostly, it seems, from Witton Park, where they had been camped despite all the offers of accommodation – bearing a banner which read: “The Belgians have rendered a service to humanity. Do what you can.”

Four local brass bands joined their procession, 50,000 flags were sold to Darlingtonians and £450 was raised – our “mystery” picture appears to have been taken on this day.

Other local communities also adopted groups of Belgians. For example, the Heighington and Bolam Parish Magazine of November 1914 tells of its villagers’ fundraising efforts.

“The Belgian resistance to Germany will rank for ever among the noblest examples of patriotism and courage,” said the magazine, before listing that Heighington schoolchildren had made six overalls (children’s), two dresses, two blue mufflers, six pairs socks (children’s), one pair men’s socks and six pillow cases, which had been despatched to Father Krajicek, who was looking after the refugees in Witton Park.

What happened to them next is still a mystery. From the Summerson family’s papers in Darlington library we know that a Monsieur Kerkhofs was working in the kitchen garden at Coatham Hall in the summer of 1917.

But all we can presume is that when peace came, like their compatriots in Birtley, they returned to their homeland.

Indeed, the Summerson archives have a death notice dated October 19, 1918, from the small town of Harfleur, in Belgium.

It reports the demise of Madame Veuve Kerkhofs, 72. A member of the Summerson family has written on top of it: “Mme Kerkhofs was one of the Belgian refugees who stayed at Coatham Hall.”

A quick flick through the 2001 Darlington and the Dales telephone book reveals a number of surnames with a Belgian flavour, beginning with ‘Le’ or ‘Van’.

It would be fascinating to know whether any of them are the descendants of the 118 Belgian refugees who arrived on the 7.07pm train 87 years ago.