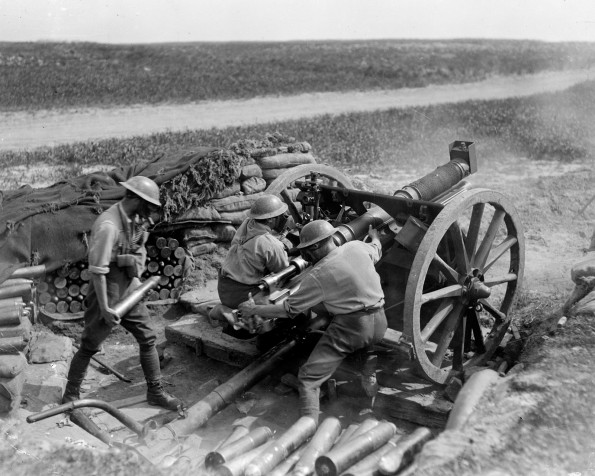 ON THE FRONTLINE: Men of the New Zealand army manning an artillery position in Beaussart in 1918. During a German bombing raid on British artillery in the same village two years earlier, Private Arthur Armstrong of Crook became 18DLI’s first casualty on foreign soil

AT the end of March, the Durham Pals received the order to move up into the frontline trenches.

Having volunteered in the heady days of late summer 1914 to do their duty, they now finally had the chance to face the enemy.

On March 25, 18th Battalion of the Durham Light Infantry left their billets in the tiny village of Citrene and began the long march to the front.

The Battalion’s war history records how tough that journey was: “The battalion began to move forward in a series of long and exhausting marches.

“The rain was incessant and mixed with sleet, but day after day the spirit and resolution of the men asserted themselves and the battalion marched in nightly without a straggler.

“The greatest possible credit was due to the band which, under the most adverse circumstances and on roads which were trying even for men to walk along singly, played almost continuously and with spirit to the very end of each day’s march.”

The first day saw the battalion march through Hallencourt and on to Longpre, where they halted for the night in comfortable billets.

It was followed by “two heartbreaking days to Flesselles, where the party for instruction in the trenches joined us in a snowstorm”

and then on to Beauquesne, which would later be Sir Douglas Haig’s advanced Headquarters for the Battle of the Somme.

Private William Weatherley, one of the contingent of teachers who trained at Durham’s Bede College, wrote home: “We had expected to escape all snow and slush by going to Egypt but when we left our village for a few days march to the line, snow was very much in evidence.

The march was done in stages and we rested at night in barns and lofts in the villages through which we passed.”

They were creeping ever closer to the front. By March 29, they had reached the village of Beaussart, which was just behind the frontline, so close it was used as a British artillery position, with two howitzers stationed at the west end of the village.

It was here that the Durham Pals suffered their first casualty in France. On March 29, a German aeroplane came over the lines to attack the village, aiming its bombs at the artillery position. One bomb exploded close to the battalion, shrapnel from the explosion killing outright Private Arthur Armstrong, 26, of High Grey Street, Crook, where his parents John and Mary mourned for him. It would be a taste of things to come.

That evening, under cover of darkness to protect them from enemy attack, the 18th Battalion of the Durham Light Infantry, silently filed into the frontline trenches to relieve the Royal Irish Rifles.

As dawn of March 30 broke, the Durham Pals were facing the might of the German army across no man’s land.