From sand to snow for Durham Pals 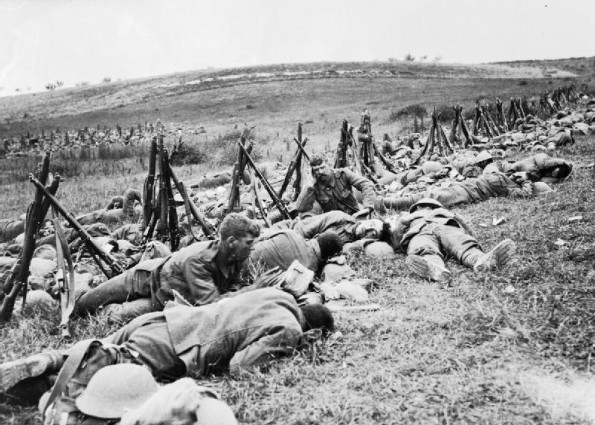 AT EASE: Soldiers from the Royal Warwickshire Regiment resting up during the Battle of the Somme

AFTER a 50-hour train journey across the length of France, the Durham Pals arrived at Pont Remy in northern France, in the early hours of March 14.

It was bitterly cold, but the men of the 18th Battalion Durham Light Infantry were simply glad to be off the train in which they had trundled from the Mediterranean coastline to within a stone’s throw of the English Channel.

Ahead of them was a hard eight-mile march down tree-lined avenues through a winter’s night to their billets, scattered around the tiny village of Citerne.

The farming village, with a population of around 200 people, was temporarily taken over by hundreds of DLI soldiers.

The battalion war history records: “The billets were very poor and even old, disused sites and hen-houses had to be requisitioned and cleaned out. A good deal of snow fell and the men found the bitter weather trying after the heat and sun helmets of Egypt. Most of the training was route-marching, as the desert had made the feet soft and very susceptible to the hard roads in France”.

Private Charles Todd, from Browney, near Durham, wrote home: “We were not to sorry to get off the train and we all had a drink of tea, which made us feel sick, then we set off to march carrying a full pack without anything to eat.

“It was five o’ clock on Tuesday evening when we marched into a village eight miles from the station. We were very hungry and tired out.

“The battalion were billeted in farm buildings, stables and cow byers, some of which were swarming with rats. My section of 10 men were luckier than most for we were given an old hen house, which was better and cleaner than what some of the men had. The people in the farm were kind and gave each one of us an egg.”

Private William Weatherley, one of the teachers who trained at Durham’s Bede College, also wrote home: “We were not altogether sorry to reach our destination after 50 hours under such conditions and it was some relief to get one’s legs stretched again. A march of eight miles brought us to our first billets in a small village well behind the line and here a fortnight was spent in refresher drill. Our feet were not in good condition for hard roads.”

The battalion spent 11 days in the barns and hen houses of Citerne and it snowed pretty much every day, but the morale of the men seems to have been high.

One anonymous soldier wrote to the Durham Chronicle: “On the journey up, we were supplied well with tea, with a strong taste of rum about it. I got quite a liking for the mixture.

“Our billet is in a barn and we have quite a tidy little room. The parcels arrived safe and sound”.

Another anonymous letter-writer seemed remarkably upbeat despite the conditions: “We had to march seven hours to reach our billets which are infested with rats. An extra blanket was given out and we enjoyed a good rest. We are happy and bright.”

But there time behind the lines was to be short-lived. On March 21, a detachment of 10 officers and 29 NCOs was taken by bus up to the frontline at Fonquevillers to get some experience of the trenches before the battalion was sent into action.

They were given tuition by veterans of the Royal Warwickshire Regiment, who guided their guests through the rudiments of trench warfare and even took their visitors across no man’s land to take part in a night raid on the German lines.

Finally, on March 25, the battalion received the order they had been waiting for, the Durham Pals were to move up into the trenches.