Engineers tackle one of England’s highest mountains to restore memorial 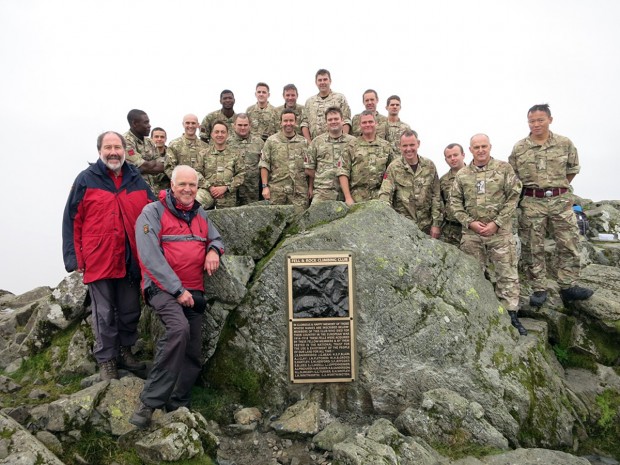 Engineers and members of climbing club with the new plaque

ROYAL Engineers based in North Yorkshire scaled one of England’s highest mountains to ensure a memorial to heroes of the First World War was restored to its proper place.

The team from RAF Leeming, near Bedale, climbed almost 3,000 feet up Great Gable in the Lake District carrying a 70 kilogram brass plaque paying tribute to members of the Lake District fell and rock climbing club who died while fighting in the Great War.

The plaque is well known among climbers and walkers, with thousands stopping to pay their own tributes to the fallen men over the years.

Spelling mistakes had recently been identified in the original plaque, which was put up in 1924 and current members of the climbing club decided to commission a replica ready for the Centenary of the War next year.

They called on the team from Leeming, known as the Deputy Commander Royal Engineers (DCRE) which is responsible for infrastructure work.

After bringing the original plaque down the mountain they have just returned to put up the new one in time for Remembrance Sunday next month. 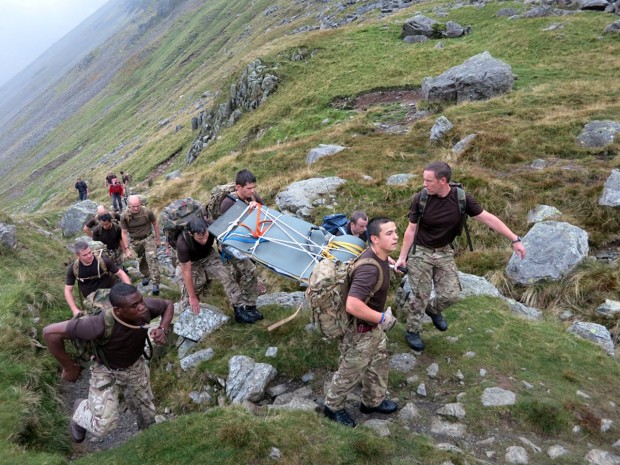 Engineers carry the new plaque up by stretcher

Club vice president, Peter Smith said: “We knew about the skills of the Royal Engineers because some of our members have served with them in the past. We are immensely grateful to DCRE for everything they put into the job.”

“It was hard work because there’s a lot of scree and debris underfoot, but we managed to do the whole job a lot quicker than we expected – less than five hours,” he said.

“There was a good sense of achievement when it was all back up there.”

To mark the event a Hawk jet from 100 Sqn, also based at RAF Leeming, provided a flypast as the group was walking back down from Great Gable.

Members of DCRE are now planning to join the Fell and Rock Climbing Club for their Remembrance service on November 10.