Remembering the 250,000 forgotten heroes of the British Mercantile Marine 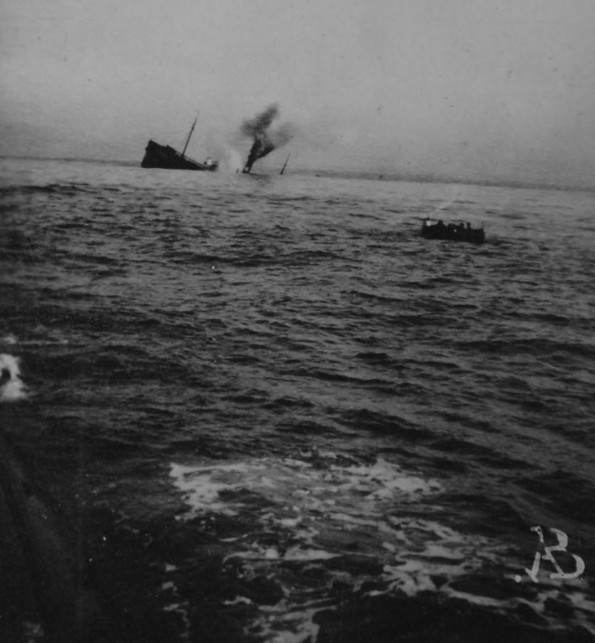 WATERY GRAVE: The sinking of an unknown Merchant Navy ship. Courtesy of the Imperial War Museum and Martin Spaldin

Yet the 250,000 sailors of the British Mercantile Marine – today known as the Merchant Navy – have largely been forgotten, their stories lost as history books and TV documentaries focus on the bloody, muddy fields of Flanders.

Now a small group of amateur historians in Hartlepool – the sea-centred town devastated by the navel bombardment of 1914 which lost more than 260 seafarers in the war – have done something to remember them.

It is worth putting the conflict at sea in context. At the outbreak of war, Britain owned nearly 40 per cent of the world’s merchant steamship tonnage. Its importance to keep Britain – an island and imperial nation dependant on sea trade like few other countries could ever be – supplied with food and equipment vital for the war effort can hardly be overstated.

At one point German U-boats were sinking more ships than could be built to replace them. If that had continued, Britain’s ability to fight a war would have sunk with them.

Ironically, it was a British naval blockade that would eventually starve the German nation into submission.

It is without doubt an epic story of courage and sacrifice that should be much better known – a situation now being addressed through the Hartlepool Heroism and Heartbreak project, which is being managed by Gary Green on behalf of the Nautical Archaeology Society, “The idea to remember the seafarers really took shape in 2013, just as we were successfully completing our Hartlepool History Then and Now project,” says Mr Green. “At this time too, there was a lot of media coverage surrounding the forthcoming Centenary of the First World War.

“Our volunteers had noticed that there didn’t seem to be much information on Hartlepool’s broader role in the First World War, and from my own point of view as a former Merchant Navy engineer, that the true heroism and sacrifices made by local men serving in the British Mercantile Marine had been greatly overlooked or ignored.”

They established a new project, eventually titled Heroism and Heartbreak, secured £54,500 of Lottery-cash, and got to work; hard, often thankless work, trawling through forgotten lists and archives.

“Unlike the men who volunteered for military service, the men of the Merchant Navy and the crews of fishing vessels, were simply civilians going about their day-to-day jobs,” says Mr Green, explaining why information was often hard to obtain. “Not for them parades along the streets with cheering crowds, nor the opportunity to have their photograph taken in their brand new uniform. For them, little had changed other than the drastically increased danger from German guns, mines and torpedoes.”

The hard work began to pay off, the public responded and the tales of brave deeds, untold for a 100 years, began to come in.

Then there was the loss of a small, working tug from the town, The Stranton, which was requistioned by the Admiralty and became HMS Char. Her original eight crew – seven from the Hartlepools – all volunteered to stay with their ship, and were lost when she foundered off the Downs following a collision with the Belgian steam tanker Frivan, on January 16, 1915. The seven local men were Edward Booth, William Booth, Ralph Fergus, Matthew Hastings, William Hatch, John Eden Hunter, and George Nossiter.

There were also the brieftest of records of merchant navy and fisherfolk killed in less commemorated, but just as tragic ways during the war. Perhaps inevitably, their stories struck a special chord in Hartlepool, a town that exists because of the sea.

Mr Green, who laments the lost information about these heroic men despite his volunteers’ dedication and hard work in going through thousands of archives, tells of his pride in the project.

“Our project has played its part in preserving increasingly rare glimpses of the ‘civilian’ war at sea,” he says, “a war fought without fanfare or parades for the men without whom Britain and her allies may well have been defeated.”

Find out more or offer your family’s story at hhtandn.org/hartlepool-at-war/wwi or call Hartlepool Central Library on 01429-242909.

An exhibition marking the successful conclusion of a Hartlepool-based project, titled Heroism and Heartbreak – True Tales From The Hartlepools At War runs until January, 2017 at the Museum of Hartlepool.