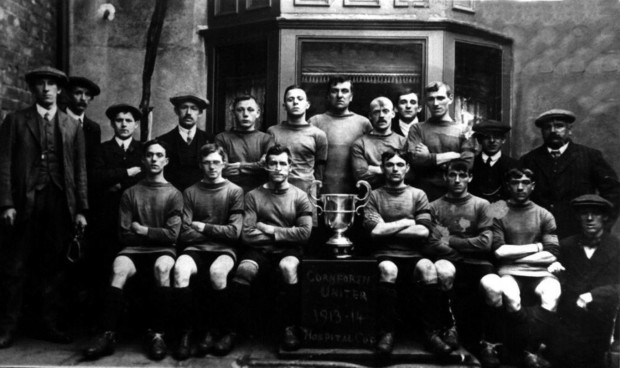 A NEW exhibition will reveal how amateur football players from a North-East pit village were transformed from sporting legends to war heroes.

From Football Field to Battlefield, at Cornforth Library in West Cornforth, County Durham, charts the fate of the village’s football team of 1913-1914 during the First World War.

Some survived, some committed heroic acts of bravery and some paid the ultimate price, yet the smiling team photograph, taken just before war broke out, reveals nothing of the heartache to come.

The photograph is the centre piece of the exhibition, which is the second staged by Andy Denholm and fellow members of West Cornforth Local History Society.

It was taken after Cornforth United won the Durham Hospital and Wingate Charity Cups.

For, Alan Robson, whose grandfather James Barton was part of the team, the exhibition is a source of great pride.

Barton scored seven goals in the final and went on to survive the war, despite being caught in a gas attack.

“I never knew him as he died just after I was born,” he said. “I had heard he was a fantastic footballer though.”

The exhibition opens on Saturday, November 2.